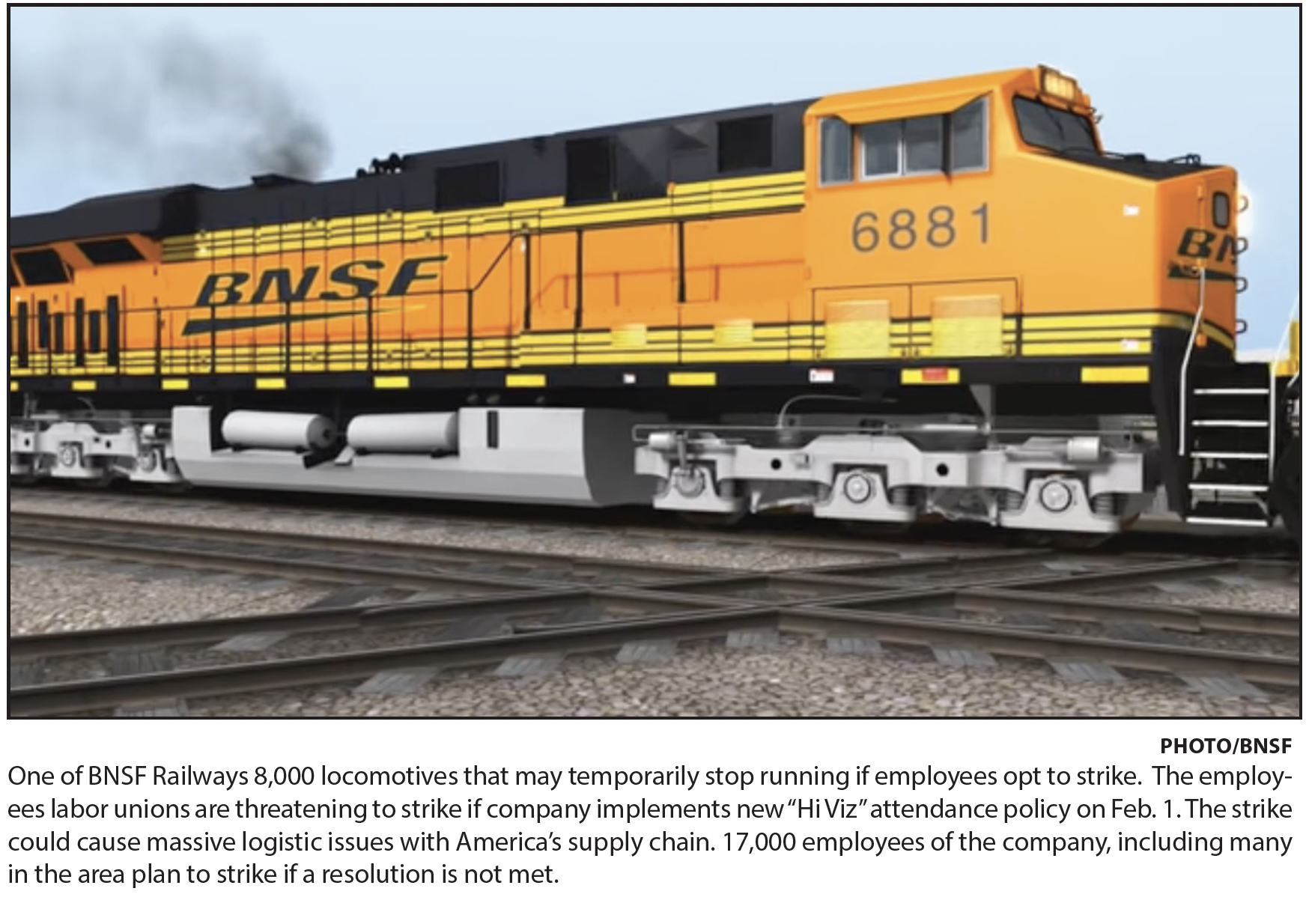 An impending strike by railroad workers against Fort Worth, Tex. based Burlington Northern Santa Fe Railway (BNSF) for a new attendance policy threatens to cripple the nation’s supply chain.

The railroad is ultimately responsible for the establishment of several cities in Spring River Country and can be traced back over a century and a half. The city of Hardy, which was established in 1883, was the result of a railroad camp. The camp continued to grow and in 1867, when the Arkansas General Assembly gave railroads a healthy incentive of $10,000 per mile of track they laid, railway construction boomed. It eventually connected larger cities from Kansas City to Memphis, with routes through Sharp and Fulton Counties by the Kansas City, Springfield and Memphis Railroad. Over a century later, the importance railways play in the economy has not changed.

Railways are the most economic method of transporting goods and raw materials from shipping points across the nation. But their treatment of employees and their safety has come in to question with a new policy that has the labor unions representing them seeking to strike against BNSF Railway, the largest freight railroad network in North America. It is one of only eight North American Class I railroads, that employs 41,000.

On Jan. 13, members of two of the  labor unions representing BNSF Brotherhood of Locomotive Engineers and Trainmen (BLET) and the Transportation Division of the International Association of Sheet Metal, Air, Rail and Transportation union (SMART-TD) representing BNSF employees,  initiated steps to strike against the company for policies contained within its new “Hi Viz” attendance policy. The proposed policy will ultimately punish valuable and long time railroad employees who have never stopped working during the over two year pandemic. 17,000 rail workers could be involved in the strike, including numerous local workers.

Under BNSF’s new points based policy, all employees are given 30 points. Any time off has to be paid for with the points. Weekdays off cost two points and Friday through Sundays cost four points with holidays costing a whopping seven points.

Points may only be earned back by working 14 days straight being on call, at which point only four points are earned back. An employee can never have more than 30 points. If they drop below zero, the employee is suspended. Even if an employee is sick, they must use points to pay for days off during the illness. When an employee is on call, they have 90 minutes from being called to be at work, anytime day or night.

BNSF asked a federal judge last week to block the potential strike by the two unions which represent 35,000 BNSF workers. BNSF says the issue is a minor dispute that would not be a reason to strike under federal law. BNSF also said in its suit that a strike could cause “devastating and irreparable harm” and in this case would “strain an already overburdened supply chain.”

BLET National President Dennis Pierce and SMART-TD President Jeremy Ferguson called  the policy “the worst and most egregious attendance policy ever adopted by any rail carrier.”

Pierce and Ferguson said the impending policy, which BNSF plans to implement on Feb. 1, “repudiates numerous collectively bargained agreements currently in place throughout the BNSF system. It is so restrictive that employees would be penalized for missing work to attend the funeral of an immediate family member.”

The men also said in their statement, “It also stands to take away any ability by our members to avoid working fatigued when they are routinely called without warning due to the complete lack of reliable train lineups, thus creating the potential for an even more unsafe railroad operation. So-called ‘forced overtime’ in an industry where safety is so critical not only repudiates our agreements, it stands to enact irreparable harm on hundreds of full time employees whose non workplace obligations prevent them from being at work every day of their life.”

BNSF sent out a FAQ to its employees, claiming they “must improve crew availability to remain competitive in the industry” and that their revised Hi-Viz program helps with this issue “by incentivizing consistent and reliable attendance.”

The Union leaders countered in their collective statement, “Members have worked tirelessly to keep goods moving during a global pandemic, but the railroad is once again placing monetary profits over people to appease shareholders and Wall Street. Our membership is tired, frustrated and fed up with the treatment they continue to receive. As is the growing trend among all major rail carriers, the working conditions at BNSF have deteriorated to the point that there are many tenured employees leaving the railroad industry because they can no longer tolerate the treatment that they must endure on a daily basis. This new attendance policy may be the tipping point for what may be the ‘great railroad resignation.’”

On Jan. 12, Pierce and Ferguson granted permission to their Organizations’ respective BNSF General Committees of Adjustment to begin polling their members regarding a withdrawal from service over this major dispute.

Under BLET laws a majority of membership at the railroad or a Local Chairman must vote to strike. The National President and Chairman must then approve the date for the workers to strike. Similarly, under SMART -TD’s laws, union leadership may authorize a strike after the affected General Chairpersons obtain two thirds majority approval from the Local Chairpersons under their jurisdiction.

Collectively, the Unions represent more than 17,000 active members at the BNSF.

Locally employees of BNSF have spoke about the harm the new policy will cause to their family life as well as their health with increased work times and little down time even if they are ill.

Plans have been made by several groups of BNSF employees across the nation, including local to protest the policy at local yards. Many have reached out to the media in their areas to help them get more exposure and make the public aware of the impending strike and policies they are not willing to work beneath.

Locals interviewed say they fear for their livelihoods as several are nearing retirement age.

How will it
Affect locals?

Among the major concerns for both members includes that of union representatives. If a local chairperson is required to take time off to conduct any type of union business, they would not be able to earn their good attendance points for that 14 day period.

Employees, many who have little or no paid day off,  may be required to take off for things like family medical leave, death in the family, jury duty or sick or personal days and must use their points to do so.

Employees who take a vacation or personal day before or after a paid event due to not having enough time off are also penalized in what the policy describes as a “Conjunction penalty” because the paid day is tied to the layoff day.

If an employee takes off for three days due to illness, they lose six points. If the employee comes back after that time and works up to 12-13 days, and is unexpectedly called for jury duty or any other reason to be off, points are further deducted and because the employee did not remain available for 14 consecutive days, zero points were earned back. The same is true of union representatives of BNSF conducting union business. This which would likely negatively affect union membership, further deteriorating BNSF employees collective bargaining abilities with the railroad.

Prior to the new system, BNSF employees were expected to be available to work 24/7 about 75 percent of the time. They will now be required to be available to the company between 90 to 95 percent of the time. Which would mean employees would only have two to three days off each month. The union leaders said the new policy would violate their contracts with BNSF and could provide an incentive for workers to show up when they are sick in the middle of the Corona virus pandemic.

What COULD BE THE overall impact of a strike?

“Rail strikes, even if brief or localized, can cause devastating and irreparable harm to carriers, their customers, other railroads, and the general public. The threatened strike in this case would strain an already overburdened supply chain, potentially causing wide-ranging harm to the national economy,” BNSF said in its lawsuit.

Most do not realize that BNSF carries the majority of items for the supply chain, including countless semi trailers that are eventually offloaded and  transported to their final destinations by semi trucks. BNSF also carries coal to power plants, fuel, crude oil, agricultural products and countless other items along its 32,500 miles of tracks across 28 Western States.

200,000 railroad employees participated in a strike in 1991 that only lasted 14 hours, ending with government intervention. Margaret Kidd, University of Houston’s Program Director of Supply Chain and Logistics told the news station where BNSF is headquartered that during the 1991 strike it was estimated that every day the strike lasted, more than $600 million would be lost. That number has undoubtedly skyrocketed in the last 31 years.

The potential strike could be devastating to local families as well as the economy. The SRC is in contact with representatives and employees of the union and will continue to follow this story as it develops, including live coverage of any protests the employees may take part in locally against the policy

Lady Rebels make it to Elite 8, finish out best season in 20 years

Salem Lady Greyhounds Runners up in State 2A Final Four

The following are paid political ads