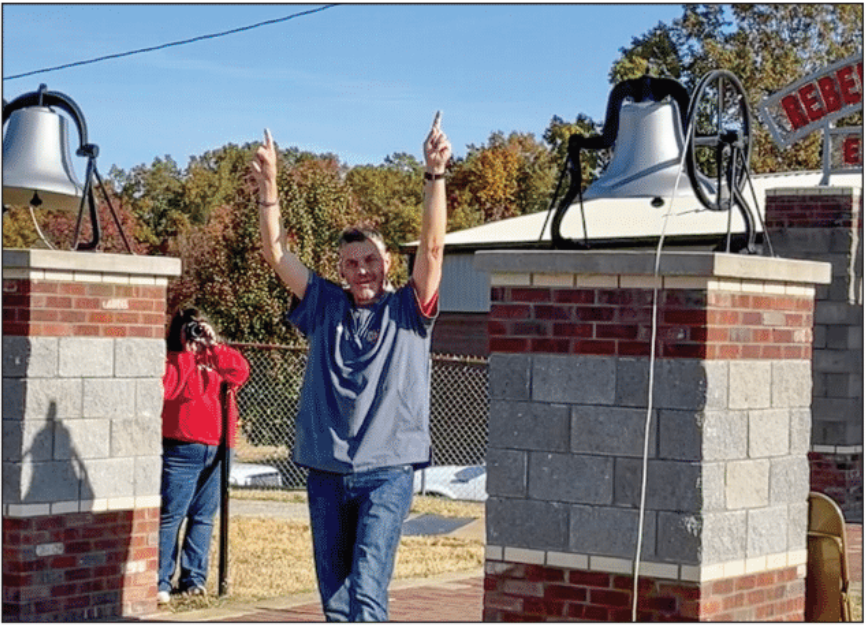 Two weeks shy of a year after receiving his cancer diagnosis, Highland coach, teacher, mentor and friend was shocked and surprised by the Rebel Nation Oct. 28 as he made his way out to the field for what he thought was a ceremony to congratulate him and both his boy’s and girls’ cross country teams for winning the District Championship and him for being named Cross Country Coach of the Year. He was wrong. While the teams were also present to greet him, the real purpose was to allow him to make good on a promise to ring the school bell when he conquered cancer, and he did. Below, Blake and wife, Mary as he rang the bell in West Plains at Ozarks Medical Center celebrating completing his chemotherapy on Oct. 14.

A tumultuous year for a Highland coach and teacher culminated on Oct. 28 as he walked out to an excited, cheering sea of red greeting Cross Country Coach Blake Medlock as he walked onto the Rebel field. Medlock thought the cheers were to honor both of his cross country teams who had just won the District Championships and himself, for being named Cross Country Coach of the Year. He was wrong. While the team would be recognized too, he saw a huge banner, bearing the words Rebels with a Cause #Team Medlock that stood as a backdrop, tears begin to fill his eyes.
“So we all know this celebration is a little bit bigger than just our District Cross Country Championships,” High School Principal Missy Floyd explained. Her voice, cracking with emotion. She spoke about the of the teams seated behind Medlock’s wife, Mary and children, Kirsten and Brendan. It was at that time Medlock realized the surprise celebration was more to celebrate him beating esophageal cancer and helping lead both the boy’s and girls cross country teams to District Championships just two days earlier, and nearly a year since his diagnosis.

Floyd called Lindsey Helm and Misti Carter to come forward and be seated as she began to speak about the establishment of Rebels with a Cause.“They did a big thing last year that we are here to celebrate today”
She went on to talk about Medlock’s diagnosis. “It was about this time last year, they were at a cross country meet and Coach Medlock got some not some good news that he had esophageal cancer and knew it was going to be a battle.” He had a doctor’s appointment that day and later told Floyd about his diagnosis. “We knew right then we had to dig in and support our Highland Rebel.”
“For those of you who have not been here your whole Highland school career, you may not know, Mr. Medlock went to school here. He is a true Highland Rebel.”
She explained he was the wingman during past sponsorships of Student Council. “For us, when one of our own has a struggle, then we all knew we had to do something. These two ladies are awesome, they went together to come up with Rebels With a Cause, #Team Medlock,” she said of the fast action to form a support system for Medlock.
Rebels from all campuses, administration, and the community and have shown their unwavering support of Medlock during his journey…. One that turned out to be more of a marathon than a journey. From purchasing and wearing #Team Medlock tee shirts, to fundraisers and a parade to uplift his spirit and show him their support as he battled for his life, the district and community have fought for Medlock.
Last fall, Floyd said that the district had planned a #Team Medlock Day to celebrate him completing surgery. Because of Covid, students were participating in off site learning for a few days. “We had it anyway, we had it virtually,” she explained. They were still able to support Medlock.
Last Spring the district was excited and planned a parade to celebrate him being well and finishing chemo. Signs, banners and a drive through parade were orchestrated by students and staff. The day of the parade, they received an unexpected call from Medlock. He told them he had to go to the hospital and apologized for not being able to come. Floyd rallied Carter and Helms again. The three quickly determined the parade needed to go on because that was what he needed, he needed his Highland family. “You guys showed up with your signs, banners, side by sides and we videoed it, we sent that video to him and it was awesome.”
Then we got the most awesome phone call, Floyd said ,holding back tears. “That is Mr. Medlock’s story to tell.” She said Medlock told her when he beats it, he wants to ring the big Highland bells and this day was set just for that.
On Oct. 12 he completed his last treatment in West Plains, Mo. Floyd said, “A few days later this group of students showed up and showed out and brought home two district championships.” Medlock was also named Cross Country Coach of the Year, four wins within a short period of time was something Medlock would certainly take after the rough last 12 months.
Floyd explained why the symbolic bell is rung after cancer patients complete their treatments. The tradition started in 1996 at MD Anderson. A rear admiral in the U.S. Navy, Irve Le Moyne, was undergoing radiation therapy for head and neck cancer, and he told his doctor that he planned to follow a Navy tradition of ringing a bell to signify “when the job was done.” He brought a brass bell to his last treatment, rang it several times, and left it as a donation. Later, it was mounted on a wall plaque with the inscription, “Ringing Out”, Ring this bell, Three times well, Its toll to clearly say, My treatments done, This course is run, And I am on my way.”
It wasn’t long until Le Moyne, bells started popping up in treatment centers across the U.S., and the tradition of ringing a bell three times after a patient completes their rounds of radiation and/or chemotherapy was born.

As a true Rebel, Medlock ceremoniously rang the Highland School bell to signify a new chapter and that his cancer marathon was run and won. He then took the mic and spoke to his many supporters.
“I really hate that I missed last semester. You know when something is taken away from you … you realize how much you miss it, and I love to teach.” The parade… When we were driving up that night and I want you to understand how bad it was, we went from talking about what we were going to do to talking about pall bearers and funeral plots. I was in bad shape.” He explained he was diagnosed with“failure to thrive.” Doctors ran some tests. That Tuesday that he received the parade video, Medlock explained that they ran some tests and told him he wasn’t as bad as they originally thought and said there were medications that would help. “I sat and watched the parade, he said choking back tears. “I saw all of you guys holding signs, and I can’t explain how much that meant to me.”
Medlock explained how the parade and everyone coming together on his behalf brought back his will and hope to live, something he felt he was losing. “Then finally … the icing on the cake…. I had a lot of fun on Wednesday [Districts]. That was the most fun I have had in my life. I couldn’t be more proud of you guys.” Medlock spoke to his teams, seated behind his wife.
After ringing the bell, he later said he rang it so loud his mother could hear it in heaven. Besides the battle with cancer, during all of this, Medlock also lost his mother in April.
He told all of his supporters to “Stop and smell the roses, feel the sun on your face because it’s pleasant.”
To see more about the track team’s victory and individual medalist, who were also recognized during the ceremony, see this week’s Sports page.