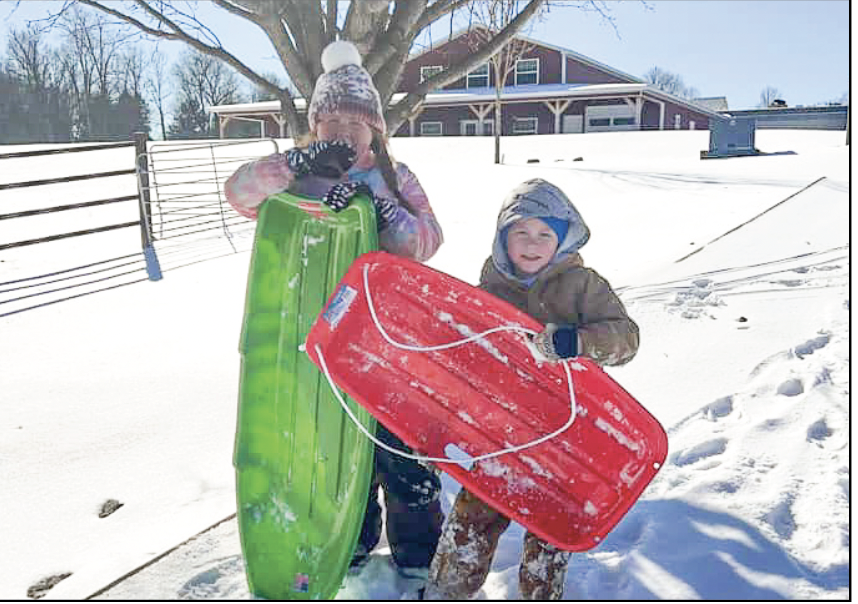 Whether we like it or not, this time of year, predictions of Old Man Winter rearing his icy head sent consumers to grocery stores to stock up for what might have been a repeat of the Great Ice Storm of 2009, just days after its 13th anniversary.

While grocery items were dwindling prior to the winter weather, the icy forecast did little to help with that as the masses purchased items for chili, hot chocolate, soups and of course, the customary, bread and milk. Locally, many items like small propane canisters and sleds were hard to find. The illusive pasta and ready made cookie dough was also scarce. But in the end, Sharp and Fulton County were dealt a pretty icy blow, it was nothing like predicted.

Luckily little freezing rain fell Feb. 2, as predicted and could have quickly caused wide spread power outages as the ice accumulated on power lines. Instead, sleet fell in buckets, with some local residents reporting 3-4 inches of sleet.

Snow followed more sleet on Thursday for the largest part of the day.  For most, the warm winter dishes were prepared on Thursday. But while parents were preparing chili, many area children were having fun challenging each other to snow angel challenges. Videos were posted on social media of hundreds of children donning their swimming suits, while parents or friends documented the occasion on video. Out they flew, bare footed and quickly laid down in the sleet to make some simulation of a snow angel in the almost solid ice. Their friends were then challenged and the fun continued.

Others opted to make then best of the day sledding, riding side by sides, or even being pulled behind them. There weren’t any snowman this time, the sleet was too hard to make balls.

Very few power outages were reported keeping local linemen close to their families on the blustery days. By Friday, some melting occurred and finally main highways were cleared, back roads, were another subject.

Many back roads in Sharp and Fulton County were not even slightly thawed by Friday night or Saturday, but Sunday’s near 50 degree temperatures brought with it lots of melting.

Several did make their way to ditches and were not able to get up hills to their homes, local agencies like the Hardy Police Department offered their help for locals.

By the end of the weekend, sunny skies had residents yearning for Spring and mad at the groundhog for his earlier predictions of six more weeks of winter.