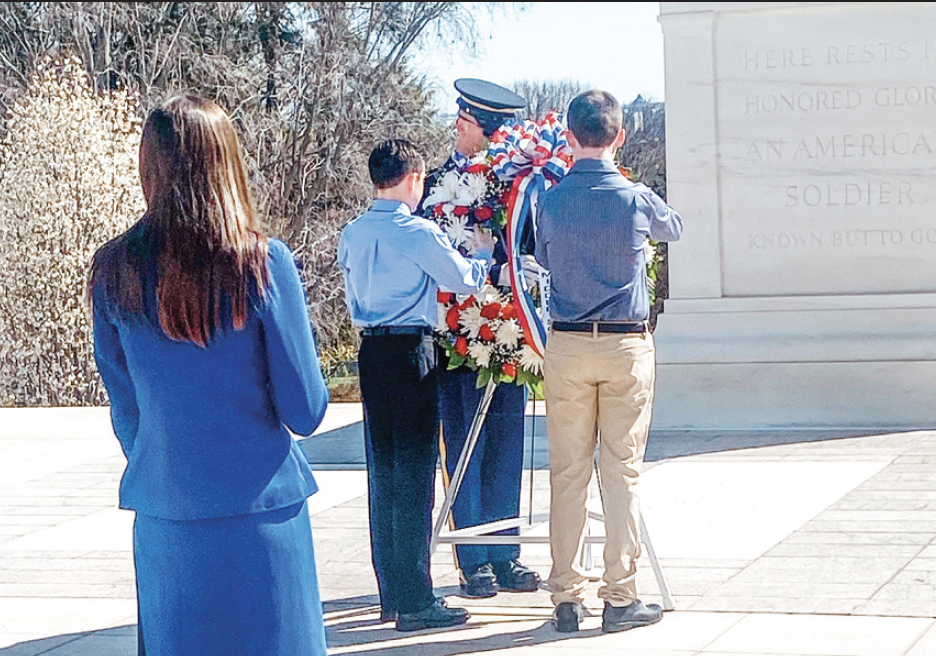 A once in a lifetime opportunity was given to four seventh and eighth  graders at Cave City Middle School over Spring Break. 11 students from Trish Turnbough’s History Club in grades seventh through ninth were able to make a trip to Washington, D.C. March 20-23. While there,  they toured the historic sites and witnessed four of their own place the wreath on The Tomb of the Unknown Soldier in Arlington National Cemetery as well as also placing a wreath on George Washington’s Tomb at Mount Vernon.

Several years ago, Turnbough began taking a group every two years to visit the sites of the city as well as the memorial.. In order to be able to make the trip in their eighth grade year, the group begins conducting various fundraisers as soon as they become members of the History Club.

“It is so expensive.  We try to raise money to help out with expense but Covid really hurt us this time. We were able to sell the “Cave” tee shirts and we sold popcorn and drinks at the fireworks display here in Cave City. We have also held Middle School dances ,but haven’t been able to for the last two years because of Covid. We had some local businesses that help out some.” This year, Turnbough said the parents had to pay more than in past and several of the student’s parents also made the trip and were able to witness some of America’s most historical sites.

Turnbough, who begins organizing the trip over a year in advance with the many behind the scenes preparations from itinerary planning to gaining proper permissions and seeking flight prices, said tears rolled down her face as she went through Arlington National Cemetery for the first time.  The bleached white tombstones against a green grass background brings to light the sheer volume of soldiers, sailors and marines who died in service to this country. This was Turnbough’s fifth trip, but the emotion is always there. She said she loves to see her students experience the history they have learned about in the classroom. Seeing them benefit from two years of hard work and fundraising culminates on the day they arrive in D.C.

Those who were chosen to place the wreath were required to submit an essay on “Why I Want to Participate in the Wreath Ceremony at Arlington National Cemetery.” A group of former teachers selects the recipients from all essays submitted and the top four are chosen.

To lay the wreath is an honor that was taken very seriously by the group. Mason Simmons, Landon Farris, Eli Higginbottom and Elizabeth Winey were selected to participate in the wreath ceremony. 38 people from the Cave City group were present for the wreath laying ceremony at the Tomb of the Unknown Soldier.

The Tomb of the Unknown Soldier stands atop a hill overlooking Washington, D.C. On March 4, 1921, Congress approved the burial of an unidentified American soldier from World War I in the plaza of the new Memorial Amphitheater.

Sculpted into the white marble tomb are panels, the East panel faces the city and  contains three Greek figures representing Peace, Victory and Valor. The six wreaths, three sculpted on each side, represent the six major campaigns of World War I. Inscribed on the back of the Tomb are the words “Here rests in honored glory an American soldier known but to God.”

The Tomb  was placed above the grave of the Unknown Soldier of World War I.  West of the World War I Unknown soldiers are the crypts of unknowns from World War II, Korea and Vietnam.

The remains of the Vietnam Unknown Soldier were exhumed May 14, 1998. Based on mitochondrial DNA testing, scientists identified the remains as those of Air Force 1st Lt. Michael Joseph Blassie, who was shot down near An Loc, Vietnam, in 1972. It has been decided that the crypt that contained the remains of the Vietnam Unknown shall remain vacant. Public wreath laying ceremonies take place daily at the Tomb and require a long advanced wait and strict permissions.

The Unknown Soldiers laid to rest at the Tomb represent all missing and unknown service members who made the ultimate sacrifice – they not only gave their lives, but also their identities to protect these freedoms.

Another historical activity the group was able to witness was the Changing of the Guard. The Guard is changed every thirty minutes during the summer and every hour during the winter. There are three reliefs, each having one relief commander and about six sentinels. The three reliefs are divided by height so that those in each guard change ceremony look similar.  During the hours the cemetery is closed, the guard is changed every two  hours. The Tomb is guarded, and has been every minute since April 6, 1948.

It was the majority of the students first time to on an airplane, others rode a bus and some families drove.   Two years in advance, Turnbough begins planning for the trip with many of the prior approvals for destinations having to be submitted well in advance, including the White House, which requires 18 months advance approval before arrival. They were not able to tour the White House or Capitol during this trip but did get to stop at both locations for photo opportunities. They do not find out whether they were approved until weeks prior to the trip.

Kiley Bray and Reece Bray laid the wreath at George Washington’s tomb at Mount Vernon. Other students enjoyed the trip with their friends and family. Club members who made the trip included: Elijah Beller, Kambrea Fowler, Levi Jones, Brionna Little and Kiley Crossno.

Eli Higginbottom led he Pledge of Allegiance,  Landon Farris read a letter from Washington, and the Bray’s laid the wreath on Washington’s tomb.

Turnbough’s gets an immense amount of pleasure taking the group to witness sites in the most historic city in America. This is the fourth time her club members were chosen to lay the wreath.

In 2019, Turnbough’s group was able to tour the Pentagon. A man working there approached one of the students in the tour who was wearing a Cave City shirt and said “I know that place.” Co-Sponsor of the 2019 trip, Heather Landers said the boy’s dad laughed and said, “You don’t know this Cave City,” referencing the small rural Sharp County town that is barely a dot on a GPS.  She said he told them he did and mentioned Superintendent Steven Green and Richard Penn [locals]” Obviously shocked, the man explained that he actually graduated from Cave City and is working at the Pentagon.

In order to be in the History Club, Simmons explained students must maintain good grades and are also chosen on the basis of their good conduct. Turnbough’s  History Club also presents one of the area’s largest Veteran’s Day recognition ceremonies each year on Veteran’s Day at the school, where club members are also speakers, greeters and ushers.

Turnbough’a heart is with veterans and history and it shines through in many of her past awards and accolades.  She also serves on the board with her husband Ed. The group with the help of the Turnbough’s were able to establish a Veterans Memorial area in Cave City that is a beautiful addition to the newly established pocket park.