THE HEART OF A COMMUNITY … Medlock benefit raises nearly $30,000

Jun 20, 2022 Blake Medlock, Highland Student Council, Rebels with a Cause 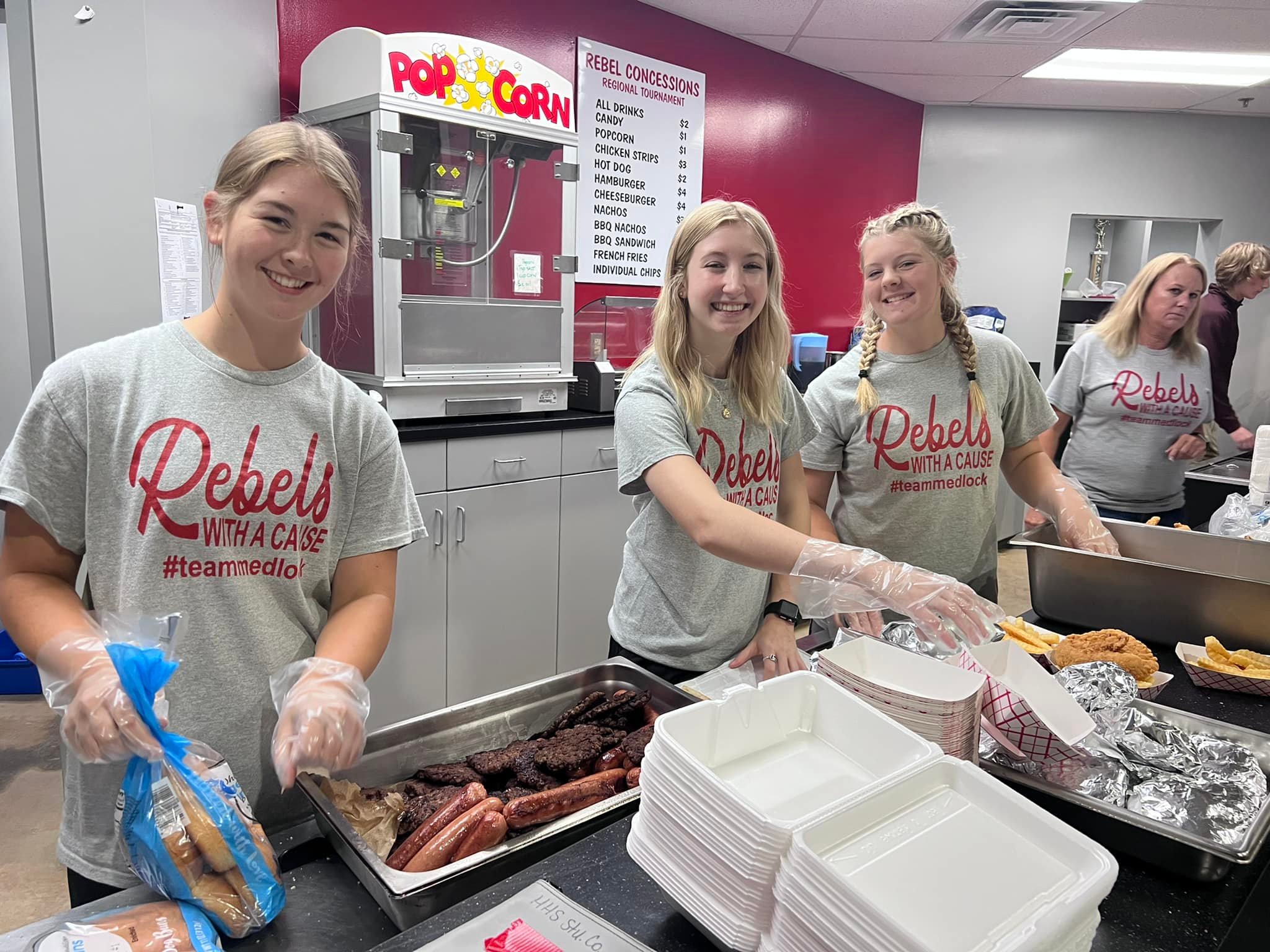 One thing is certain in Spring River Country, when one of our own is in need, the community always steps forward in mass to support the families in need. The Blake Medlock Benefit Auction was no different.

A large crowd of fellow teachers, administrators, staff, students, friends, family and community came out to bid on numerous items on June 11 donated by local businesses to support their fellow teacher, coach and friend. Organized by Lindsey Helm and Misti Carter, members of the Highland Student Council helped serve hot dogs , hamburgers and chicken strips with all the fixings for attendees to enjoy during the auction.

When Highland computer and business teacher and track and field coach Blake Medlock, first announced his diagnosis with stage one esophageal cancer on Nov. 14, 2021, an instant support group arose.  The massive group, evolved quickly into Rebels with a Cause #Team Medlock. This is the group who have continued to support the family with this massive benefit meal and auction that was held at the A.L. Hutson Memorial Center in Highland.

His final chemo treatment had to be delayed because of low blood counts and being sick. Medlock remained in the hospital until finally completing his treatments on Jan. 28, before coming home to await surgery that was originally scheduled for March.

His return home was short lived, as he had to return to Barnes for six more days. During this time, he had a feeding tube inserted into his stomach to ensure he received the right nutrients to help him gain weight. The tube remained until his surgery.

On March 8, the Medlock’s returned to St. Louis for a PET scan to determine how the cancer had responded to the treatments. At that time, his surgery was set for March 30. But, on March 15, he had yet another setback, and doctors performed the endoscope to determine what the issue was.

But, this time the news was good. The scope determined that Medlock’s chemotherapy and radiation had been successful and that tumor was beaten. The concern that led to the endoscope came after doctors saw  green on the PET scan, which was from severe inflammation. At that time, doctors also told Medlock, that while they thought the cancer had spread to his stomach, it was likely that was not the case and the swelling was from immunotherapy.

His stomach feeding tube was removed on March 19 and he was given new medications and the Medlock’s once again made their way back to Sharp County with his surgery postponed to allow him to build his body back up and gain weight. Later in March his biopsies came back negative for cancer

Medlock completed a major surgery on his esophagus and stomach at Barnes on May 4, and returned home on May 12 after surgeons determined the procedure went well.

It was only after receiving the pathology reports from his surgical procedure when the Medlock’s thought they were almost at the end of what he calls an “Ugly, bloody and painful battle,”  when he received word last week live cancer cells were found in both parts of his esophagus that was removed as well as in his lymph node This means, he must endure more treatments, that are set to begin in July. This time, he will be able to return home after each visit to rest, as they will be done at West Plains.

The funds from the benefit will assist the family with medical expenses and other things needed during his journey to finally end his cancer journey.

Organizer Lindsey Helm said, “First, we want to shout-out a few more local businesses that helped us out greatly.  Bill’s Cash Saver provided all of the bread, tea, lemonade, and gave an auction item donation. FNBC provided the water.

Subway of Ash Flat provided the condiments and veggie trays.

And we had the best dessert selection I’ve seen in a long time. Thank you to each person that contributed something tasty.  And to so many other businesses that I’ve posted over the past couple of weeks contributed awesome items. This auction wouldn’t have been a success without each and every one. Thank you to all of our team who helped make contact and collect donations.   And to everyone that came to eat and bid, and a HUGE shout out to Tony Watson, our auctioneer and to Mike Watson for managing emcee duties so well.

Shop local, folks.  We live in the greatest little community on earth.”

Helm or Carter may be contacted through the Blake Medlock Benefit Facebook event page or through the Highland Student Council Facebook page for anyone who would like to make a donation.

The Medlock family said, “Words cannot express the heartfelt thanks we have for our community.  Thank you to the workers who put on such an amazing event, the area businesses and families that so generously donated items, and the friends that showed up to the auction. We love this community with all our hearts.”