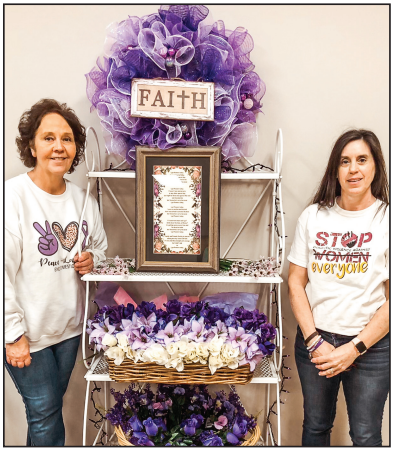 Karen Bagwell’s vision of helping women and men who have been abused was always something she thought she would like to establish. It wasn’t until after years of prayers and what many would agree was Divine intervention, did she push forward to establish a battered women’s support and outreach group, and is in the process of establishing a shelter.
After Spring River Adult and Child Services (SACS) closed a few years ago, Bagwell was abundantly aware of the fact women and some men who were in abusive relationships and had children could not be housed locally. She began in March, 2021, hoping to volunteer somewhere and found there wasn’t anything local.

“I guess the spirit just makes you sense things. I just kept praying about it and I felt like He was telling me to open a home,” she explained. She recalls thinking she was too old to do it. She said God made her recall her past when she was too terrified to go home. “I took all the money out of my purse and bought a hotel room for the night so I would be safe, I didn’t have money for food,” she explained. “When you are in those situations, you know what is going to happen if you go home. To me God was saying, ‘Can you do this for people?’.” She said this is how she began helping local women.

She was paying for gas for the women to get places and hotels for them to be safe. It was very difficult but she received some help from area churches. She put her idea to establish the support and outreach group out in a group message at Abundant Life Church, where she attends. The next day, church secretary, Reba Johnson, was driving to work and came upon a young mom walking with four children. She had been beaten and drug through the mud. She said it was a very powerful beginning. Reba and her husband took the family to a hotel. The lady is still in her support group.

She said there was so much frustration. The most frustrating part was having to tell the women who lived in the area they can’t keep them safe locally. Many have children who attend school locally and to protect them, they have to be sent off to other towns. She has had to send women as far away as Harrison.

“We have some very passionate people about this cause and I think we can do it.” She has a lady in her support group who best explained the desperation women encounter when leaving an abusive relationship. “She felt she should have stayed and just got beat up once or twice a month and my kids were taken care of and I didn’t have to struggle like this.” The victim was speaking to the financial, housing, emotional and childcare issues victims face after already dealing with having to leave.

The Sharp County Quorum Court gave the organization$130,000 in American Recovery funds at its July meeting to help purchase a four bedroom home that will be used as a shelter after it is modified. Bagwell has been getting advice from an associate who worked at Serenity in Mountain Home who is familiar with the needs of the home. She said the goal is to keep the shelter location secret for the safety of the women it will house. While Safe Night also will help men, the shelter will be for women.

The house will be staffed 24/7. They are currently operating an outreach group. They have a place to shower, washer and dryer, and a huge amount of clothing for women who need them, as well as a kitchen in which they cook meals for survivors who are going through the tumultuous part after leaving their abuser. There are one or two advocates at the outreach location at Highland, behind the Highland Twin. There is someone at the outreach Tue. through Fri. 9 a.m.. until 4 p.m. and Sat. 8 a.m. until noon.

They receive food from Delargy’s Warriors food distribution in which the outreach receives non-perishable food items they keep at the center for victims.

Safe Night has several volunteers and who answer calls on an after-hours advocate line. Once the shelter is established, there will eventually be a 24 hour hotline.

The volunteers are mostly from Bagwell’s church. Others come from their Facebook page and volunteer by shopping or helping with other chores at the outreach. Safe Night currently has 11 volunteers. Five of those work full time, including Bagwell, Kathy Grimes, Jeana Carter, Audra Boyd and Dana Vandyk.
The funds for the staffing will come from Victims of Crime Advocates grants. “It is almost a given if you get your grants in on time,” she explained. She said that is one of the issues SACS had, not getting grant paperwork completed in time. Safe Night plans to hire a grant writer. She said she and some of the ladies will work with the writer and learn what needs to be done and which grants can be obtained in hopes they may be able to eventually submit them.

Bagwell feels it will realistically take until the end of the year fundraising to have enough money furnish the house and construction updates. It is very hard for a newly established shelter to get funding. With her networking abilities, she has already found several sources who will be instrumental in helping with fundraising and construction. She currently has a painter that has agreed to paint for free.
Currently, Safe Night needs volunteers who are in construction related fields to donate labor and or materials to help make the shelter a reality.

Fulton County Quorum Court also gave the organization about $23,000 to run their outreach while they are waiting to get the home established. “We didn’t want to wait to get the shelter established before we started helping people,” Bagwell explained. The shelter will serve Sharp, Fulton and Izard Counties. She plans to go to Izard County seeking donations to assist them in helping clients locally after they get a little more accomplished.

Safe Night is not a church ministry but said it is faith based, and she speaks victims who are not Christians and loves them just the same.

The Purple Purse fundraising campaign will begin in October, National Domestic Violence Awareness month. Purple purses will be distributed to churches, organizations and businesses in the area who wish to help raise funds for the shelter. The purse will remain until the end of October when a representative will pick them up. Cash and checks can be added to the purse all month by supporters. Deanna Kissee has been instrumental in the organization’s fundraising efforts and also keeps up with paperwork at the office.

Bagwell said she is very happy and humbled at the community’s support of Safe Night. She could not have done it without all the ladies who help behind the scenes and Kasy Cates who keeps financial records and pays the bills and

By establishing the shelter, the need for women to have to be sent away will be diminished and it is Bagwell’s hope that they will be able to go on to lead happy and healthy lives with the assistance provided by Safe Night.