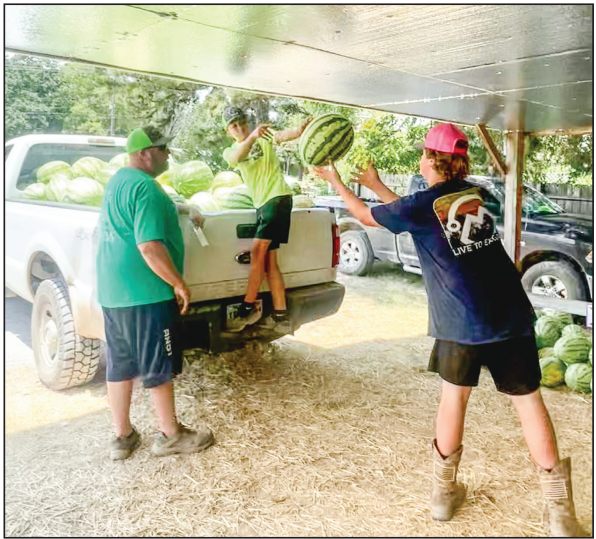 No one will ever argue that watermelon blood doesn’t run deeply in Cave City. Perhaps it runs deepest in the Carter family with roots that go back four to five generations for two growers.

Grower Brian Carter can trace that blood back to his great, great grandfather who hauled melons from Sandtown by wagon to sell in Batesville in the early 1900s.
Brian and his grandfather, Billy, raised melons, together since he was a young man. The only year he recalls not growing them was during the drought of 1980. In 1998, he became a partner with his grandfather, dad and uncle. The four split in 2002 and he and his dad and grandfather became partners in 2002. Just a year later, Brian and his father joined forces and spent the years putting out some of the best melons in the area. This family legacy continued until 2012 when his father passed away. Brian produces 12 acres of watermelons each year and keeps the family tradition going. His wife, Kimberly, and son, Bricen now help him with the hard work that the Carter’s find fulfilling each year when they put out the their elbow dripping watermelons.

As with all growers, the production process has evolved. From the meager beginnings of trusting Mother Nature would water the melons, to implementing irrigation in 1998, to the current plastic and drip tape irrigation techniques, each improvement moved them forward.

The work is something Brian and Kimberly, who helps him in the greenhouses and other operations on the farm, finds rewarding. The melon blood is also what brought Brian and Kimberly together. Kimberly’s mother, Becky Johnson is also part of the Johnson’s Brother’s Watermelon’s. The two have a ,common goal, producing some of the best melons in the area.

The Carters raise their own hybrid melons in the greenhouse and then transplants them into the carefully, perhaps even artistically, prepared soil six weeks later. Brian, who used to work for Farm Services in Lynn, said it is something he learned while working there that he finds is the key to healthy production. “It is the micronutrients in the ground and you got to make sure your PH is right with your lime to get the uptake of all your nutrients. Also make sure your fertilize and everything you do is right. Soil preparation is the number one thing.” They transplant the melons in May then care for the melons until production any time between late June and mid July.

While production techniques are improved upon each year, Carter said all melon farmers have common issues they must face each year. “We try to stay on top of the diseases. Bugs have been the worst this year that I have ever seen, I have kept them controlled but have had to stay on the top of them.” He explained cucumber beetles have been really bad for the watermelons and squash bugs have also been bad. Brian also sells squash, cucumbers and tomatoes at the family stand. This year, the Carters were one of the first growers to have the fruit of summer out for the public. Their first melons came out on July 5. With the extremely wet spring, followed by the drought the area is currently undergoing, Brian said the yield is down a little bit from what they typically have out by this time. They are currently getting out three truckloads of 130-170 melons each per day.

“We try to keep the best product we can for our customers,” Brian explained. He said about half of the Carter melon sells go to Missouri, mainly through word of mouth advertising and previous sales. “A lot of them will say their dad used to come down and get a truckload and want to take back 15-20 for their families.”

He said the trip down is something the families enjoy, like an event that is an annual summer right of passage. This is much the same as it is for locals, getting excited for melon season as the anticipation builds to cut open the first melon of the years.

Over the last three or years, Brian said he has never seen the watermelon sales in town as good as what they have been Like the Johnson Brothers, the creation of a Facebook page has been the single most important criteria in increasing their sales.

In June, Brian’s phone begins to ring continuously with customers requesting melons. “They sell themselves.” He also gave a lot of credit to the Cave City Watermelon Festival committee for helping publicize the growers information and when they have melons available. “The folks with the watermelon festival committee the last several years has really done an awesome job. They have built it really big. It is almost to the point it is hard for this little town handle. It think 14,000 people came through last year and we always hope they get a melon, but there are not as many growers as there has been in years past.”

While the ongoing drought has undoubtedly given growers more than a few sleepless nights, Carter recalls something his grandfather told him about melons. “My grandpa always told me the drier the year, the sweeter the melon,” He has had several customers tell them they have really knocked it out of the park this year with the sweetness of the melons the Carter’s are producing.

With all the help Bricen gives the family, it is easy to see a new generation of the Carter melon lineage slowly emerging.

Brian Carter Melons is located on 167 in Cave City, next door to Buttercup’s Kitchen.