It will never be enough – Davidlee Stansbury 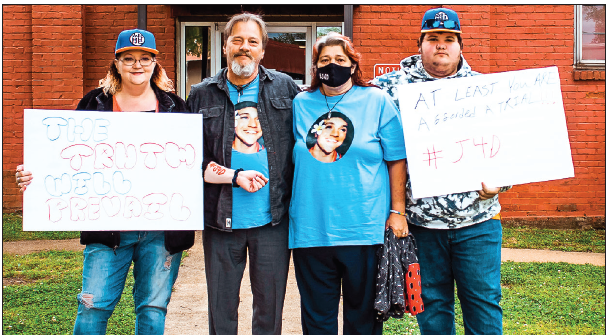 Photo/Tammy Curtis
Friends Courtnie Poe, far left, and Hunter Laire, far right, stood in support of justice alongside, David and Alicia Brewer, the parents of murder victim, Davidlee Stansbury last May. This was the first of many court appearances for two of the three accused of murdering their son or acting in the crime. Travis Barker was arrested at a later date and pled guilty to First Degree Murder on July 25. He was sentenced to 30 years in prison. Trials for the other two suspects, mother and son Jacoby Goehler and Jennifer Harnden will be held later in the year. The family has spent many hours in court and spoke out about Barker’s sentence.

There are no victories, only conclusions when a family is forced to sit through dozens of court proceedings against their child’s killers.

July 25 was the first of what will eventually be three conclusions for the family of 19-year-old murder victim, Davidlee Stansbury. The young man’s life was taken all to soon when he was shot to death last April near Salem by a person who had been his friend for many years, Jacoby Goehler, with Travis Barker helping to facilitate the crime.

Photos of both boys were in each others homes, standing as a testament to how deeply their bond of friendship went.

Stansbury’s parents, David and Alicia Brewer sat in court in Batesville last Monday to again face one of their son’s accused killers and hear his negotiated guilty plea. The couple were dressed in light blue shirts with Davidlee’s smiling face on the front as a reminder of the life taken and the reason they continue to sit through proceedings giving their son a voice from beyond the grave. Travis Barker, who was charged with first degree murder, pled guilty and was sentenced to 30 years in the Arkansas Department of Corrections for his role in Stansbury’s murder. He has already been transported to prison.

Barker’s confession to police changed several times but in the end, Prosecuting Attorneys Eric Hance and Dewayne Plumlee proved Barker helped Goehler burn evidence and dismantle and dispose of the murder weapon. He lay in wait in a barn he was familiar with on the property until he heard Goehler return with Stansbury to assist in completing the brutal crime.

Barker also provided the murder weapon and location for the killing to take place. In his confession, he admitted to his role in helping lure Stansbury through deep woods with a phone flash light to the location in which the 19 year old’s life would ultimately end. Barker also admitted to holding a cell phone flashlight from the hood of Goehler’s vehicle after the killing to prevent having to turn the headlights on and risk being detected leaving the murder scene. Once the two returned to Barkers Jefferson City, Mo., home, he also supplied napalm to accelerate the burning of Stansbury’s cell phone and wallet.

On June 2, 2022 the Brewer’s listened to the recorded confession for the first time in a suppression hearing. The motion, filed by Barker’s public defender Michael Kiel Kaiser of Lassiter and Cassinelli, sought to suppress evidence from the May 21, 2021 interview where Travis Barker voluntarily gave the detailed statements about the murder to Salem Police Chief Shad Overman.

The motion alleged that “…law enforcement officers illegally detained Barker, brought him to a police station, and proceeded to interrogate him at length. Barker is alleged to have made incriminating statements during this custodial interrogation. Barker’s statements were induced by false promises of leniency, and were thus involuntary. Further, Barker’s statements were irreparably tainted by the illegal arrest despite Barker waiving his Miranda rights during the interrogation.”

Both David and Alicia wept during portions of Barker’s testimony, learning more detail than any family should have to bear. “We are doing this for Davidlee,” Alicia said after the hearing. “Because he doesn’t have a voice, they took that from him.” “When we heard Travis’s confession that pretty much ripped our hearts out and I was feeling a lot of rage over it,” David explained of actually hearing Barker’s voice during the confession.

In the end, Judge Tim Weaver ruled against suppressing statements made by Barker during his second interview. The next time the Brewers would have to appear in court was last Monday when Barker accepted the first of what the family hopes is three guilty pleas, including Goehler and his mother, Jennifer Harnden, who were also charged in the case. Stansbury was shot three times after Goehler and Barker led him through the woods. “Nothing is ever going to be enough. They took our son away from us and there is no replacing that. I will live until my dying day to make sure they pay for it.”

Alicia said in 20 years when Barker is eligible for parole, if they aren’t alive, ADC will contact their family. Both have told their children they will be contacted and each is to write their own impact statements to the parole board detailing the effects the murder of their brother had or still has on them.

“He wouldn’t even look at us,” David said. “He attempted to cry when I called him out on having no remorse,” Alicia explains of Barker’s demeanor during the plea. She became very emotional when telling that after his plea, Barker’s family got to go over and hug him goodbye. “It pissed me off because I don’t get that with my kid.” “They stole that from us,” David explained. “You don’t know how bad it is or how tempting it is to cross that line,” David said. “We have to show our kids how to act, if we let them go, oh my,” Alicia explained of the rage the family has for the three. It wasn’t until hearing the confession that she learned Travis’s mother and sister knew about the murder after being friendly with them at the first hearing having lied to them about their knowledge of the crime.

“This thing has taken an impact on our family,” David explained. Davidlee helped the large family play bills. “He was a big help, a tremendous help.”

Alicia recalled a memory that stood out as testament to their son’s love for his family. She recently came across a video of Davidlee singing “Hopelessly Devoted to You” to his handicapped older brother, Aaron. She said regardless of whether all three defendants are sentenced and sitting behind bars she still won’t get peace. “Nothing is going to bring him back. Everyone’s talking about closure and this kind of stuff. Even when court is over and they are where they need to be, it’s never going to end for us.”

“You are always expecting your kid to come home,” David explained. They said the first year the milestone dates were extremely difficult. This year they are trying to maintain some sense of normalcy in their lives. “We can’t have Davidlee’s death being a part of everything,” his mother explained. The Brewer family has crossed several hurdles in their attempts to get back to some semblance of normal lives.

“Each kid deserves normalcy,” David explained. He said when they are alone, they let their guard down. “When everyone is there, you have to compartmentalize and stuff it down deep and that little chamber is really full.” The couple has maintained strength for their children, significant others and grandchildren. The Brewers realize they still have a long road ahead of them and potentially two more trials, or at least two more pleas. Alicia and David have sat through many hours of court proceedings and will continue to in hopes of seeing justice served against their son’s killers. Barker received 30 years in the Department of Corrections on the charge of First Degree Murder. He is not eligible for parole for 20 years. He was credited with 432 days jail time.

The Brewers were back in court on July 23, this time to allow Judge Weaver to determine where their son’s accused killer, Jacoby Goehler, possesses the mental capacity to stand trial. His attorney was not present, but Weaver had previously read over the documentation from postdoctoral fellow, Meagan Miller. PsyD, and her supervisor Sandra Michel, PsyD, at the Arkansas State Hospital who completed the examination on May 25, 2022. The two determined him fit to stand trial . Weaver set a pretrial date for Goehler for Sept. 1, the same day as his mother’s, and a Oct. 19-21 trial date has also been set the same day for Harnden.

“Davidlee was the type of person who would be there for anyone. It absolutely tears us apart knowing that he needed someone. No one was there for him,” Alicia explained, and David added, “Especially for Jacoby, he was there for him too.”