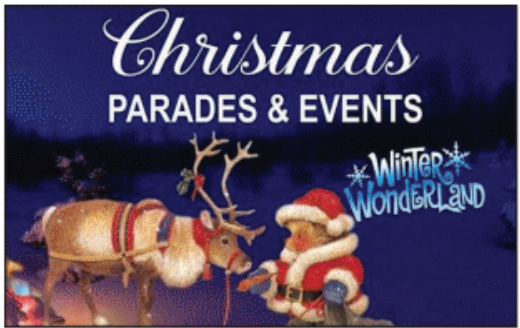 Horseshoe Bend
The Horseshoe Bend Chamber of Commerce will host the Annual Christmas Parade on Dec. 3, beginning at 10 a.m. with lineup at 9:15 at the Airport. Santa will be available after the parade for photos and cocoa. The Horseshoe Bend Fire Department will be selling brats, fries and hot dogs with free hot dogs for the kids.

Ash Flat
The Ash Flat Christmas Parade will be held on Dec. 3, beginning at 5 p.m. This year’s theme is Candyland. Mallie Gibson was the winner of the tee shirt design of the year. The Parade Committee is also collecting food for their annual food drive for the elderly. Non perishable food can be dropped off at Bootlegger, the Ash Flat Livestock Auction, Ash Flat Pharmacy, Meacham’s, Sharp County Outdoors, FNBC and Kaitlin Crawford Hair and Makeup .More information will be posted as it becomes available.

Mammoth Spring
The Mammoth Spring Chamber of Commerce with host their annual Christmas Parade on Dec. 3 at 6 p.m. This year’s theme is Santa’s Workshop. The parade will run down Main Street.

Imboden
The 2022 Imboden Christmas Parade will be held on Sunday, Dec. 4 . The parade begins at 3 p.m. The parade route will travel West 4th Street to Greyhound Circle at the Sloan Hendrix Campus.
The parade entries line up is scheduled for 2 p.m. The line-up will be as follows, Antique cars line up on Hendrix street south of 4th street , floats and walkers line up on Fourth street behind Shelter Insurance/Imboden RV , old tractors line up on Hendrix street north of 4th street, emergency vehicles line up between Hendrix street and elm street, and all animals unload at the Imboden City Shop. Organizers stated that in the event of inclement weather, the parade will not be rescheduled.
For more information contact Joe Chappell at 869-2513.

Salem
The Salem Christmas Parade will be held on Dec. 3. The theme for the 2023 Christmas Parade is Whoville for the Holidays, however the floats can be any Christmas theme. The parade will start at 5 p.m. with line up at 4:30 p.m. at Preacher Roe ball park. All businesses, churches, school clubs and individuals are encouraged to enter. Prizes will be awarded for the top three floats.
The Whoville Hustle Fun Run will start at 11 am.
Santa will be available in the gazebo for pictures again this year.
Vendors are welcome. There will also be food trucks on the square.
Anyone wishing to set up as a vendor is asked to message the chamber on their Facebook page, or contact Heather at 895-6247.

Hardy
The Hardy Christmas parade will be held on Dec. 10. This year’s th is Super Hero Christmas. Lineup is in front of City Hall at 9 a.m. with the parade beginning at 11 a.m. The grand Marshall for the parade will be Renee Clay-Circle. The parade runs down Main Street. Santa will be available for the children after the parade. Shops will be open for local shopping as well as live Christmas music.
While there is no entry fee for the parade, registration is required. To register, Call City Hall at 870-856-3811 or visit www.cityofhardy.org.

Batesville
Batesville Kiwanis Club is proud to present this year’s Christmas Parade on Historic Main Street. The theme is Storybook Christmas. Line up will be held on Sat. Dec. 10, beginning at 4:30 p.m. at Town Plaza for all floats. Arrive no later than 5:30 p.m.. Kick off is at 6 p.m.
The route will be Main Street ending at Marshall’s Dry Goods which is the pick up location for all float riders.
If you plan to have a float in the Parade and want to be judged,  please complete the entry form on the Batesville Kiwanis Christmas Parade Facebook Page.
Once the entry is received participants will receive an email providing you with a number that will be assigned so that the judges will know who you are. We ask that you create and display your number on the right side of your float so that it can be seen from an upstairs area along the Parade route.
No numbers will be assigned the night of the Parade.
Batesville Kiwanis is thankful to be able to present the parade again this year and does not assume any liability for accidents that might occur from the presentation or participation in the parade.
The parade organizers have one request. Please do not incorporate a Santa on your float or any vehicle, as Santa will the last float at the end of the parade, presented by the Batesville Kiwanis. Multiple Santas cause confusion for the little ones.
For more information, contact drmartin72501@gmail.com or 870 -793- 7355 and 870 -613-1317.

Cave City
Mark your calendars now for the annual Christmas parade on Dec. 17 beginning at 5 p.m., with lineup at 4 p.m. Bring the kids to meet Santa,Mrs Claus and the Grinch at the park after the parade. There will be popcorn, hot chocolate and hot dogs free as long as it last. Food donation boxes for the local food pantry will also be set up. Prizes will be awarded for the top three floats.