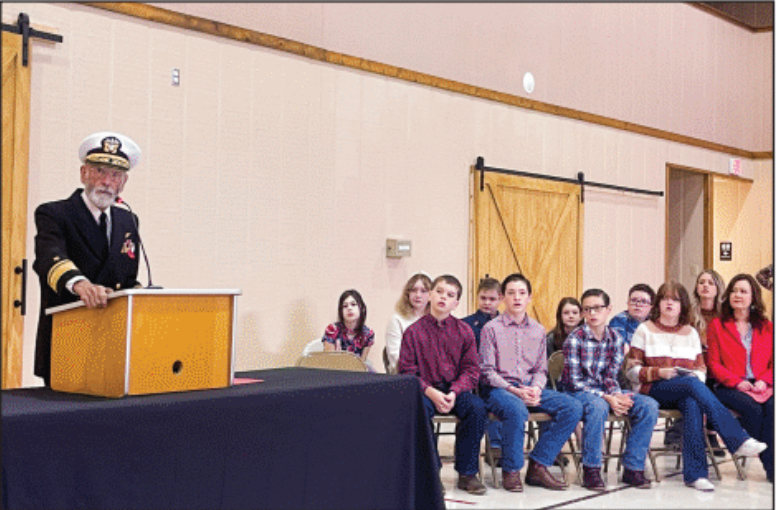 There were not very many empty chairs at the Cave City First Baptist Church on Veterans Day as the Cave City Middle School History Club honored area veterans.
Around 200 people showed up for the special tribute the students provide each year. Under the sponsorship of Trish Turnbough, students spoke from their hearts with many tears being shed throughout the service.
The Ceremony was opened with the Pledge by Bentley Brockway followed by the Star Spangled Banner by Landon and Micah Farris.
Emily Cross welcomed the large group to the church, after rain and inclimate weather moved the service from the Cave City Veterans Memorial. Before the introduction of Guest Speaker Admiral Robert Carius by Colton Crumbly, Veterans Day poems were read by Jayden Dryer and Dixie Miller.
Rear Admiral Bob Carius was born and raised on a farm in rural Illinois. He entered the United States Naval Academy in 1947, graduated in 1951 as a commissioned officer in the Navy. Carius’ career was centered around Naval Aviation, flying from aircraft carriers. His aircraft squadron during the Vietnam War made several deployments to the Tonkin Gulf in support of the war. He had the pleasure of assisting in the recovery of the Apollo Ten astronauts in 1969 and again when in command of his ship, the USS New Orleans, when they received the Skylab Two astronauts in 1973. He retired after 34 years of service and has worked locally on several projects since.