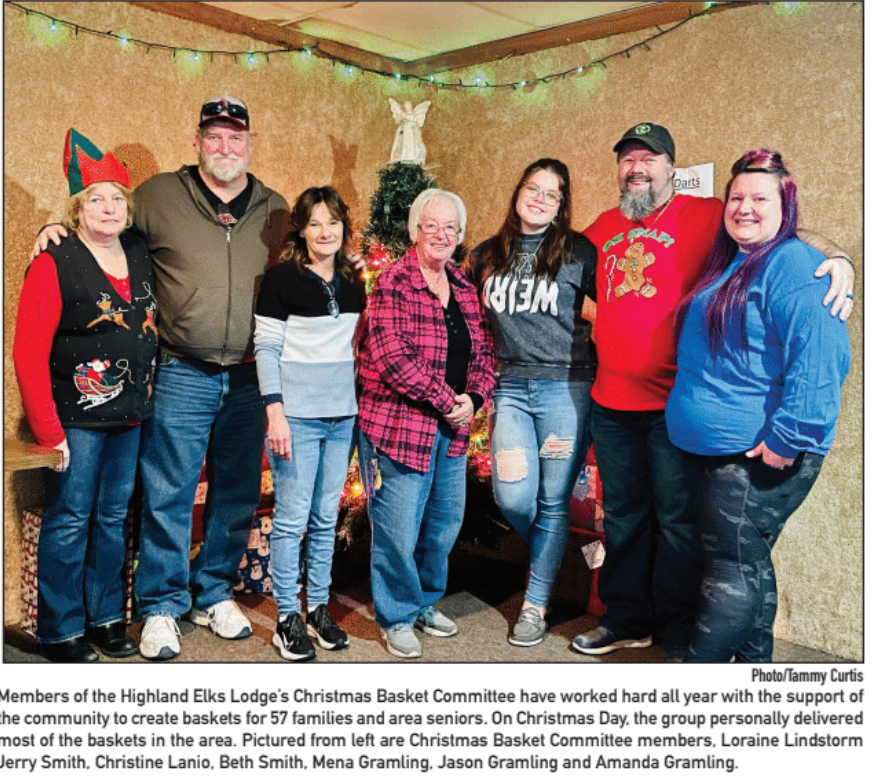 Each year a team of elves works their magic at the Highland Elks Lodge to ensure families and seniors in the area have a brighter Christmas. Beginning in August, the fundraising begins for the Elks Christmas basket program. With dinners, various raffles, silent auctions and donations, the organization helps people from children to adults raises money and donations to fill baskets with gifts and a Christmas dinner to distribute on Christmas Eve.
This year, the Christmas Basket chairwoman Christine Lanio was very excited that their group was able to complete 57 applications for families ranging from one to seven children, 14 seniors and bought over 500 gifts.
“I started this in August, my goal was $10,000; we hit $11,200,” Lanio explained. The fundraising for the program began in August.
They arrived at the Elks Lodge like happy elves at 8 a.m. on Christmas morning and began delivering the bulk of the baskets around 9 a.m., just in time for Christmas.
In addition, members of the Elks pick families off the tree and adopt entire families. She said last year, the tags on the tree for the Angel tree program were individual. This year, since there were differing number of gifts bought for each child within a family last year, she grouped them into entire families to ensure everyone received the same amount of gifts.
On Dec.19, six ladies shopped for 92 children spending. In conjunction with the baskets, they also had a friendly competition between dart players and non dart players. The Outcasts and Dart Players held a food drive to help fill the baskets with food for the families.
Committee member Jerry Smith was tasked with shopping for food for the baskets. He shopped for 22 hams and about $1,800 worth of food. He also got 60 turkeys for the baskets. In addition to the gifts, each family received a box of food. Families with greater numbers of children received two boxes.
Lanio said when they took the applications, they asked if the families had ovens and were able to cook. For those who did not, they had volunteers who were cooking meals. She said they had a couple who lived in campers. “We don’t want them not to be able to have turkey and enjoy Christmas.”
She said her boyfriend Brent Watts took applications to the Highland School District administration for assistance in determining the need and received 36 applications for families.
The Christmas Basket program also serves seniors. She said, “We have a little couple they delivered to last year and her daughter died and left her with two grandchildren. Her husband died this year too. So now it is just her and her grandchildren. I am making sure that little lady is taken care of.”
Representatives with the Shop With a Cop and Angel Tree consulted with Lorio to ensure none of the families in need were left out.
They were able to spend about $75 per child in gifts and about $100 in food delivered in the baskets.
Lanio moved to the area last December and met Watts in January. He introduced her nto the Elks in February and she undoubtedly hit the ground running, helping with many of the programs and memberships. She is Lecturing Knight, Ladies Auxiliary and does Elks Lodge indoctrinations.
Members of the Christmas Basket Committee also include Amanda Gramling, Beth Smith, Jerry Smith, Jason Gramling, Loraine Lindstorm and Mena Gramling.
“Brent helped a lot too, but it was a joint effort. We had 17 people here on Monday and we wrapped 500 gifts, not including ones that members took off the angel tree and brought back in. I have had it five months (the program) and we pulled this off. We learned a lot and will make it better next year,” Lanio explained.
“This year we got Fall convention, so you are going to have about 300 Elks come and take up every single hotel room in the area,” she proudly explained. She said they plan on updating the lodge prior to the convention to make it more inviting for Elks from across the nation.
The Highland Elks Lodge provides a huge outreach in the community, assisting many groups of people from young to seniors. They also have a veteran’s outreach committed, host the Hoop Shoot contest that provides scholarships, to Easter egg hunt, Halloween Trunk or Treat and Breakfast with Santa, a Turkey Shoot, well as numerous special dinners and other events.
Lanio said she was very grateful for the donations by various businesses as well as individuals that helped make the event successful.