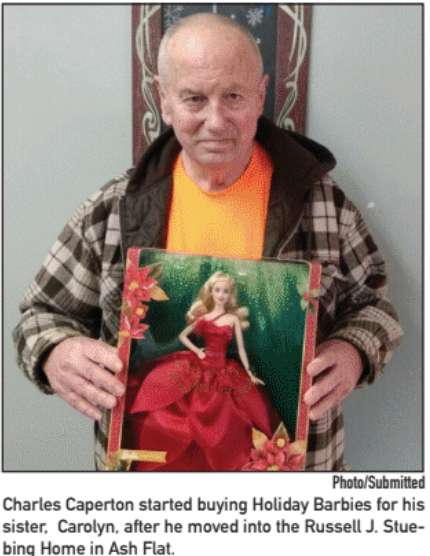 By: Andrea Bruner, Special to the SRC

Carolyn Brewer of Wideman never had a real Barbie doll when she was a little girl – only imitations. So when her mom gave a Holiday Barbie for Christmas in 1998, a surprised Carolyn immediately understood the sentiment behind the special gift.
It was the last Christmas gift her mom gave her, as she died eight months later.
But her brother Charles Caperton, a resident at the Russell J. Stuebing Home in Ash Flat and a consumer with Network of Community Options, Inc., would continue the tradition for another 20 Christmases.
—
Charles and Carolyn were born in Monticello along with one other brother. Carolyn said her father moved them to Pine Bluff when his job took them there, but they never had a lot of money.
Charles, who has autism, was born premature and their mother had her hands full taking care of all of them along with the home. More than one person suggested they move Charles to an institution but their mother said no, and she took care of him until she was no longer able.
Carolyn worked for the Department of Corrections in Pine Bluff as a bookkeeper and when a job came open at the North Central Unit in Calico Rock, she applied. She and Carl moved up here along with Charles and their widowed mother. Their mother worked at Walmart in Mountain View and Charles would fix his own breakfast and coffee, and when he knew it was time for her to arrive home he would be waiting at the door.
Christmas 1998 was a memorable one.
“She (their mother) told me as we were growing up, they couldn’t afford the real doll so I got an imitation,” Carolyn said.
On Mother’s Day 1999, their mother learned she had a brain tumor, and the following September she died.
“Before Mom passed, she asked, ‘What’s going to happen to little Charlie?’ and I said, ‘I will see to it he’ll be taken care of,” Carolyn said.
Charles lived with Carolyn and her husband Carl for a couple of years, but Carolyn said she has a heart problem and she worried what would happen to Charles if or when she wasn’t able to care for him.
Carolyn first learned about The Martin Center, an adult day treatment facility operated by NCO, Inc., and Charles began going to that for a few hours every day. Then, she found out about NCO’s group home in Ash Flat, named Russell J. Steubing Home, but was told the next vacancy might be two years away and Charles was down on the waiting list.
Fortunately, a vacancy came open and Charles was able to move in right away, but it was a little more difficult for Carolyn than she had expected.
“It was very hard for him to go somewhere else,” she said.
Charles moved into the Stuebing Home in 2002.
“That Christmas he told his worker he wanted to get me a Barbie doll. He remembered what my mother said,” Carolyn said.
“Tears come to my eyes when I think about it. … A lot of people don’t realize how autism works or how it affects adults,” but she said Charles can remember the names of people he’s met just one time, even long after their introduction.
She said their uncle George lived nearby when the kids were growing up, and he often took a young Charles to the park, fishing, or on other outings just to spend time together. Later, when they visited George after he’d moved to Texas and everyone had long since grown up, Charles would take a picture of George off the wall and carry it around the whole time he was there.
“My mom and I could not understand why he was obsessed with it,” Carolyn said.
She finally asked her uncle, and he responded with, “Priss, that’s the way I looked 40 years, when I was taking him places.”
It dawned on Carolyn and their mom then that Charles was remembering those times. When George died, his children gave that very picture to Charles.
As surprised as Carolyn had been to open that Holiday Barbie from her mother in 1998, she said she was even more surprised to open another one from Charles a couple of years later.
“His worker went with him to get Christmas gifts and that’s what he wanted to get me,” Carolyn said. “Every year since he has given me a Barbie doll for Christmas.”
Carolyn said her brother is compassionate and has a big heart. “He’s always thinking of others before himself.”
Her husband, Carl, who died four months ago, had not been around anyone with disabilities until Charles came to live with them, but Carl and Charles became close. “Charles is very special and a joy.”
She said moving to north Arkansas was one of the best decisions she and her family ever made, and Charles has thrived at the Stuebing Home. Ten years ago or so, he had to have open-heart surgery, and he stayed with her during his recovery.
“He was so bored,” she recalled with a laugh. “He kept saying, ‘I want to go home, I want to see the guys.’”
She said she rests easier knowing he’s well-cared for and has lifelong friends there.
“He’s a very special blessing in my life.”