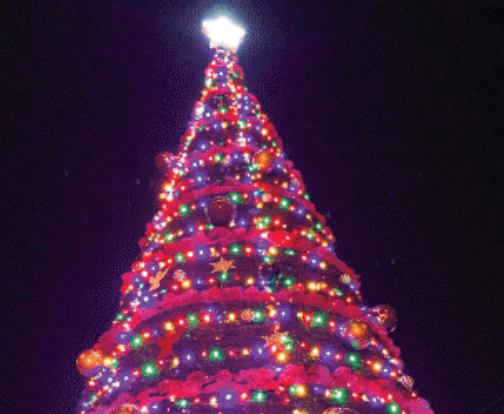 By: Andrea Bruner, Special to the SRC

A 50-foot Christmas tree stretching to the sky is there to remind everyone who sees it this is a season of hope.
John 3:16 Ministries’ newest Christmas decoration is more than just an oversized tree – it is a symbol for the downtrodden and the suffering, according John 3:16 Instructor Brent Waugh.
“The Christmas tree was inspired to get families here,” Waugh said. “We do have large events (such as Community Fest and concerts), but we want events to get families and kids involved, and what better way than a Christmas tree? We want families to know they are welcome here – this is a good place for a family to come.”
Eric Trautwein, instructor in the John 3:16 fab shop, said when the administration came up with the idea of building a tree for the campus, he started researching designs.
“We do things so big here,” he said with a laugh.
Originally from Farmington/Bismarck, Mo., Trautwein said he had to come to John 3:16 five times for interviews before finally getting in as a resident in January 2019.
“I’ve been here ever since,” he said.
Trautwein said he talked with Todd Pierson, instructor in the John 3:16 body shop, before settling on a design fabricated with metal rings stacked descending sizes to form a 50-foot-tall cone topped with a four-foot star and lit with multi-color lights.
Trautwein said he believes they were specifically led to this design.
“Jesus just showed up and showed out – nobody has built a tree this big,” he said, explaining that in Christianity, the Christmas tree is symbolic of the birth and resurrection of Jesus Christ, and that the star on top signifies that “Jesus our Lord has come.”
“Christmas brings hope and Jesus always has hope – at John 3:16 ministries we want to offer that hope,” Waugh added, “hope that they will be getting better presents under the tree, if you will, not just this year but next year and the next – with a dad coming back, or a son or even a grandpa, restored and free from addiction.
“Guys here probably don’t care that much about a 50-foot tree, but there’s gonna be a kid here who cares, so anything we can do to show families we care about them as the man here is a good thing.”
The residents at John 3:17 Ministry, a women’s facility in Jackson County, also helped decorate the tree with angels and snowflake ornaments, as well as a few store-bought Christmas bulbs.
Trautwein’s fiancé, Erin Cates, is the lead instructor at John 3:17.
“We are thankful for the spirit of cooperation between our ministries,” Waugh said. “We all have the same goal – lead others to Christ.”
Waugh and Trautwein said Santa Claus will make multiple appearances where the children can tell him what they want, and there will even be an upcoming special Sunday service where Santa reads the birth of Jesus. “Santa will give a Walmart gift card to each child that comes up on stage and listens to the story,” Waugh added.
Next year will mark the 20th anniversary of when Bryan Tuggle came to the old Fort Steer property at 75 Holmes Road in Charlotte with the goal of opening a spiritual based boot camp for men with drug and alcohol addictions, much like the boot camp he himself attended.
The ministry started with one man and has continued to grow and build more dorms to accommodate more men bound by their addictions. John 3:16 currently has approximately 215 residents, including instructors, and is about to start building two more 12-man dorms, according to Waugh.
No man is charged for his stay at John 3:16. As the camp instructors explain to tentative residents, Jesus Christ has already paid the price. All operations are funded by churches, private donations, and benefit fundraisers.
To learn more about addiction and/or John 3:16, visit www.john316thecure.com.