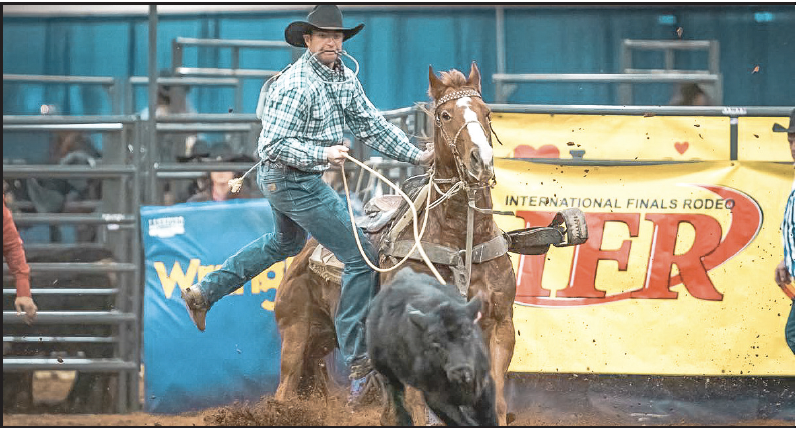 “Having a rodeo husband isn’t for the faint of heart. Rodeo is a such a unique sport such as there is so much preparation, hard work that gets put into it just for a few seconds of performance.”

Living the rodeo life isn’t for the faint of heart, but for long time local cowboy Hadley DeShazo and his wife, Bree, they wouldn’t have it any other way.

Hadley has made quite a name for himself in his young life, most recently placing first in the second round of calf roping at the 52nd International Finals Rodeo. This competition took him to Guthrie, Okla. Jan. 13-16 to compete in the four day competition.

The small town boy who grew up in Viola, also finished the year out as seventh in the world and eleventh place as All Around Cowboy.

Hadley, who is only 28, has been rodeoing since he was only 12 years old, so the lifestyle runs in his blood. The Franklin resident has already made it to the International Finals Rodeo (IFR) nine times. He chooses hours on the road, ropes, sweat and dirt covered arenas over anything else.

After joining the IFR in 2013, he has taken home his share of not only memories and notoriety, but money. What is better than being paid to do something one loves?

Hadley’s biggest win to date was in St. Tite, Quebec where he brought home around $7,000.

When he isn’t rodeoing, he works as a stock contractor for timed event cattle and trains horses.

A typical rodeo season puts Hadley on the road across the United States and Canada competing in 60-80 rodeos each year. Tie down (or calf roping) is a sport in which a cowboy’s horse is held in a roping box by a rope barrier beside the calf chute. When the roper signals for the calf to be released and it crosses a predetermined line, the rope barrier is released. If the cowboy breaks the barrier a 10 second penalty is assessed. The roper then chases the calf on horseback, then lassoes it and dismounts in pursuit of the roped calf. He must then throw the calf down by hand. The roper then ties three of the calf’s legs with a six foot pigging string he has carried in his teeth. If the calf breaks free the run is disqualified. When the calf is tied the the roper signals the competition by raising both hands to end the timer.

While the skill required to do all of these things within seconds takes years to perfect, another aspect of being as successful at the sport as Hadley, is the horse.

The horse is trained to hold the rope taut without dragging the calf for the cowboy to tie.

It is easy to see how a cowboy’s horse is their livelihood in rodeo. Last year Hadley retired Whiskers, the 24 year old roping horse he had rodeoed on since he was 12. He began training Little Man, and it was Little Man who took him to his ninth and Little Man’s first IFR last month, helping him fill the shoes of his predecessor.

Hadley married Bree in 2017 and she has remained his biggest supporter. Bree said she sometimes gets in the truck and goes with her husband on the rodeo circuit. Having a full time job makes it harder because he is often on the road for weeks at a time, she loves to travel to his competitions on weekends as often as she is able. “Having a rodeo husband isn’t for the faint of heart. Rodeo is a such a unique sport such as there is so much preparation, hard work that gets put into it just for a few seconds of performance. When Hadley isn’t doing good on the road, my heart hurts just as much for him when he is “in a slump.” As hard as rodeo life can be sometimes, it has taken us all over the U.S., introduced us to lifelong friends, and made new memories. There is nothing quite like a rodeo, it’s atmosphere, the crowd and seeing the excitement in his eyes when he makes a “perfect run.” I know this way of life won’t last forever, so enjoying each moment is important whether it be a good or bad moment.

Besides competing in IFR, Hadley has earned the respect of those in the rodeo world, both locally, state wide and nationally. He is also a member of the Arkansas Cowboys Association (ACA), Among the many awards at the state level, he was named ACA Calf Roping Champion in 2013 and 2015 and was the oACA All-Around Cowboy in 2013, 2014, 2015 and 2020.

Hadley will undoubtedly approach life just as he does the sport, roping it quickly as if it could escape at any moment. He and his wife Bree, live in Franklin.