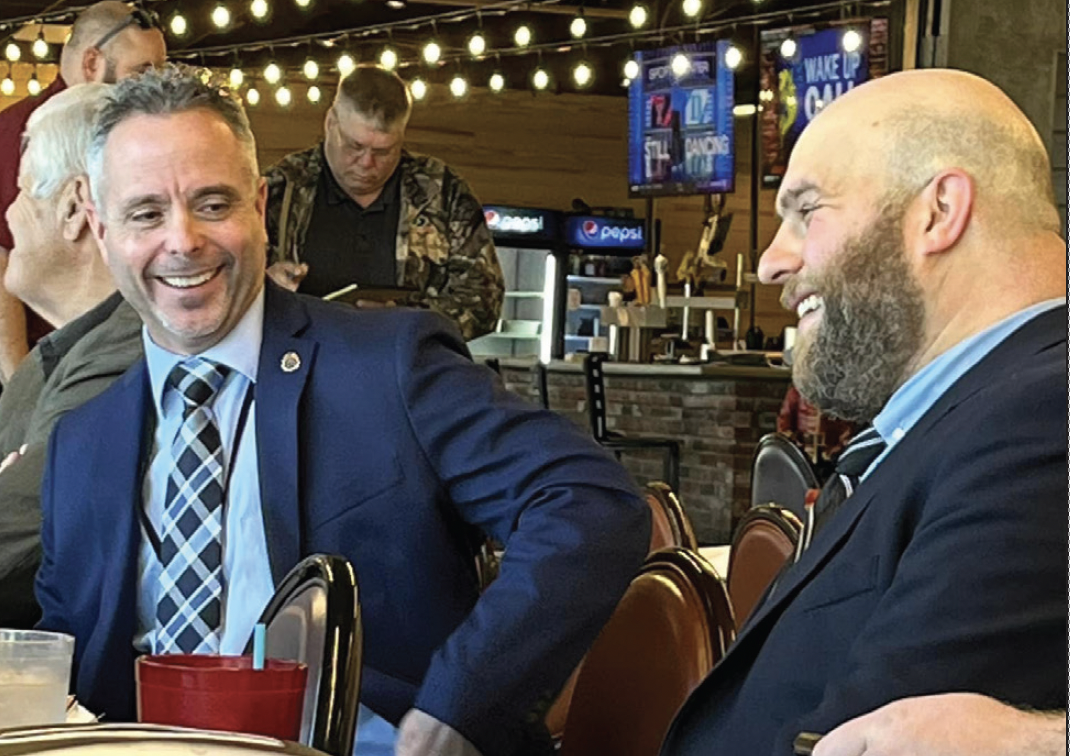 Angelia Roberts, Special to the SRC

15,000 grams or just under 40 pounds of Methamphetamine

32 grams of other Hallucinogens

“Our role as a task force is to assist in making good cases. Any case that we work, is your case whether we are assisting something that you have rolling or whether we go out in the middle of the night. Wherever it happens is your case. We utilize our district-wide knowledge, and we are there to help you make good cases and stop the distribution into your communities.”

Watts spoke briefly about Comprehensive Opioid Abuse Grants which resulted in two additional officers being assigned to the task force, along with two peer recovery specialists.

“The program has been a great success. Last year, with the help of that grant we were able to link a fatal overdose to a dealer that was in Sharp County. As a result, J.C (Logan) and Cody (Lee) along with the DEA got involved which resulted in seven indictments. That’s pretty ground-breaking and Arkansas Drug Director Kirk Lane has used us as a template for the rest of the state.”

Sheriff Jack Yancey expanded on the two COAP grants awarded to Izard County that allowed Izard County to hire two additional officers, J.C Logan and Cody Lee and assign them to DTF. Another part of that grant involved hiring two peer recovery specialist, Josh Ramsey and Ashley Sanders and Angelia Roberts as the project coordinator whose job is to try to work with the people who are low level users.

“Since we instituted that program, we have placed over 80 people in rehab. The numbers are particularly high in Izard County where we have about 30 and they are in long-term facilities.

If anyone comes in our facility on drug charges, Angelia interviews those people, because she is there every day.

Yancey told the various agencies in attendance, “If you are not at this point taking advantage of that program, you’re making a mistake. and I would encourage you to reach out to the recovery people, judge, investigators to learn more about the program. I think you will be proud you did.”

Prosecutor Eric Hance talked about how the drug forfeiture money is used and how his office works to keep the percentage allocated to it as low as possible.

“We fund all the local money for the Victim Advocate Program with the prosecutor’s share. I think it’s a good use of the money. No city or county money goes into that.”

Hance, who is aware of the drug problems throughout the 16th Judicial District said a vast majority of child abuse and domestic battery can be traced back to opioids.

Harper has an extensive history in law enforcement. He started working with the DEA in 2004 in wiretapping and interdiction and then relocated to Quantico just as the DEA was just launching their cyber investigations.

“It was the biggest learning experience of my life. If we are not doing deep web, dark web, and clear web cases we are missing it in narcotics.”

Harper gave a snapshot of what the DEA is currently seeing.

“World-wide there has been 105,752 deaths from November 2020 to October 2021 and 75 percent have been opioids. There have been 69,435 from synthetic opioids and we are now seeing them all over Arkansas. The little blue M30 Oxycodone counterfeit pills that are laced with fentanyl are killing people left and right. Fentanyl and Car fentanyl, is being found as well.”

“Overdoses have risen 15.9 percent in the last year. Overdose involving opioids have risen 17.2 percent in the last year. Synthetic overdoses are 25.4 percent and is the primary driver the cartel is making in super labs in Mexico. A kilo of fentanyl pressed, and cut could end up making 5 million from a distributor just off a kilo of fentanyl. It’s a very lucrative business and it’s just going to get worse before it gets better.”

“Meth is still the king. Our three offices have seized 524 pounds of meth since October of last year.  You can get a kilo of meth on the border for around $1,500. The demand is there, and the quantity is in bulk. Our offices have seized 13,500 fentanyl pills. Cocaine seized totals 18 and a half pounds since October 1. Forty-six guns have been seized with half of the traffickers armed at the time of arrest. We are seeing an aggression towards police in Little Rock, North Little Rock and in Northwest Arkansas.

“It’s a snapshot of what we are seeing.”