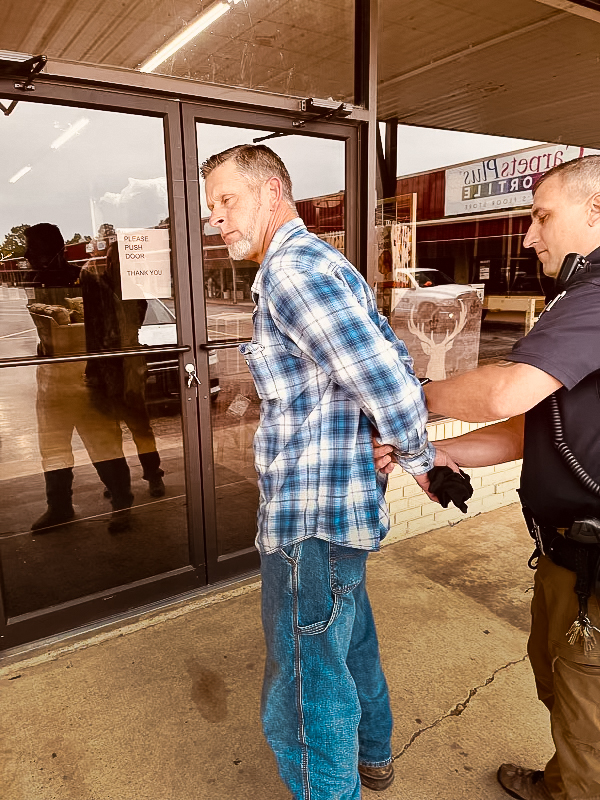 An Ozark Acres Suburban Improvement District Commissioner and a former employee of Tri County Farm and Ranch was caught red handed by Highland Police attempting to steal an air conditioner from Forschler’s Home Center on May 24. Matthew Wayne King, 47,  claimed after his arrest it was to get store owner Matt Forschler to confront him.

According to an incident report from the Highland Police Department, on May 18, business owners Matt and Lisa Forschler came in to the office to make a complaint to Sgt. Steve Dravenstott regarding someone coming into their store before business hours and stealing property and money from their cash drawer for some time.  On May 6, the Forschler’s started keeping a close eye on their property and cash and documenting what was missing.  On May 16,  they installed security cameras. On May 17, the cameras caught King in the store when it was not open for business. At that time, they didn’t find anything missing.  On May 18, King came back into the business and was caught on camera stealing a large rug. The Forscher’s then brought the videos to the police station and the Highland Police Department increased security around the store.

On May 24, around 7:30 a.m. Dravenstott noticed a white Dodge Ram 1500 pulling a trailer with a lawn mower pass through the school zone where he was patrolling. Dravenstott believed King was driving the truck. He followed it into the parking lot of the Highland Square Shopping Center as it parked at the corner of Forschler’s. A man exited the vehicle and walked to the door of the furniture store. Dravenstott drove by a few times and on his last pass by, he noticed the man wasn’t outside the door. He pulled into the parking lot to see if he was in his truck.

Chief Shane Russell was out walking the front sidewalk in front of the store at that time and  Russell motioned for Sgt. Dravenstott to come back. He noticed King inside the store holding a box. Upon seeing the police, King sat the box down on a table and came outside wearing a brown jersey glove on his left hand. According to the incident report, King said, “I’m doing security checks for Matt Forschler.” When asked by Russell why he was in possession of the air conditioner, he said, “Matt asked me to move it up to the front of the building.”

Dravenstott then placed King under arrest for Commercial Burglary, a Class C Felony. Among the possessions found on King at the time of his arrest were the keys he had used to gain access to the building. A Glock pistol that was in his truck was confiscated for safe keeping as his truck was towed. King was transported to the Sharp County Detention Facility where he was booked in. After his arrest Dravenstott met with the Forschlers who turned in their reports and videos. The videos showed King entering the store on multiple occasions and dates. A total of $2,548 in cash was taken since May 6 and a rug valued at $350. After the cameras were installed on May 16, showed King in the store in different clothing on four different occasions.

During a Post Miranda interview with Sgt. Dravenstott and Ash Flat Police Department  Det. Wendall Lane later that night, King confessed to being in the store several times and stealing the rug. King said, “I was mad at Matt and was doing that to get him to confront me man to man.” He told the investigators the Forschler had given him the keys to the store and said after stealing the rug, he took it to Tri-County Farm and Ranch and threw it in the dumpster.

King was fired from Tri-County Farm and Ranch in April of 2022 and was never employed by Forschler’s Home Furnishings.

King was released on his own recognizance after his arrest without having to post bond on the Class C Felony Commercial Burglary charge by District Judge Mark Johnson.