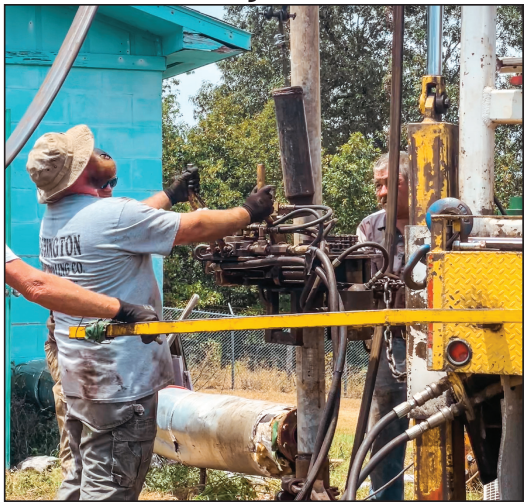 The Dog Days of Summer always bring the most extreme heat but when a drought is also factored in, the dependence of families and farmers on a water system is at its highest. When a pump and generator fails, shutting down an entire city’s water supply, that can cause catastrophic issues for many.

This is exactly what happened to the residents of Sidney two weeks ago.

Sharp County’s Emergency Management Director Jeremy Langston gave an update on the situation to the Quorum Court on July 11.

He said the Sidney Water System experienced a pump failure and ended up replacing pump and motor. It ran on generator backup because Sidney was also having electrical issues at the well. July 8, the system finally went back online with the system on Entergy power. Later that evening, lightening struck the motor and burnt it out. This caused an emergency situation for the city. Being proactive, Sharp County Emergency Management Director Jeremy Langston sprung into action and began evaluating the situation and weighing the city’s options.

Sidney is hooked into Cave City, Mount Pleasant and Grange Calamine’s water systems but the only viable option was to get water from Cave City. While Cave City doesn’t have a backup water system, the 500,000 gallons of water Sidney needed was able to be supplied. At night the system had to shut Sidney off in order to recoup the water it had pumped during the day. Grange Calamine would not have helped due to the elevation and Mount Pleasant doesn’t have enough flow to send the amount of water required to Sidney.

Langston had the National Guard on standby to bring in trucks of water in the event the system did not get up in time. Chicken houses were also in danger of being shut off, as they are required by their contracts to have a well with city water backup. “People were a little more important than chicken and watermelons during times like this,” Langston explained.

Langston said the city was having issues with Entergy. “The voltage is going haywire. It is a makeshift three phase system, and not a true three phase system. The pump motors were not designed to run on that type of system. They are doing the best they can with what they have to work with.”

Sidney’s generator also began malfunctioning and eventually quit during the water outage. Arkansas Rural Water lent the city a generator for two weeks. Langston said Energy is working on getting their three phase line installed. “They just need a little motivation to step up their game. They are not being real cooperative about getting in touch with anyone.”

Working together, Washington Pump Service, the company who installed the new pump initially, made a fast trip to Springfield, Mo. on July 11 to pick up a new one. They began pulling the damaged pump and readying it for a new one the same day. The next day, crews with Washington Pump had the pump installed and the system back up by the late afternoon on July 12.

One of the employees installing the pump showed a small bullet sized hole in the pump caused by the lightening that caused the secondary situation after its replacement.

Justice and State Representative elect Bart Schulz said during the Quorum Court meeting that he was in a text group with mayors, senators and representatives who were “Trying to put the heat on Entergy to get something going.”

Due to the small size of the city, they were forced to utilize the reserves in their water department coffers to fund the new pump. They then had to turn around and do it again after the lightening strike.

“They are in a financial bind and trying to get the paperwork together to get insurance to pay for the damages,” Langston explained.

While the issue was very touch and go and could have been much worse, the problem was resolved and plans were made in the event it may have taken longer.

Mayor Nate Block said the city has been in touch with state and federal elected officials about the issues in an attempt to get Entergy to fix the issues as they are required to do.

A call to Entergy to speak with officials about the three phase system is not completed and an estimated time of completion was not returned at press time.