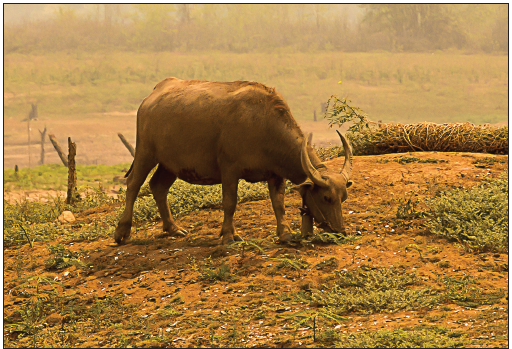 Area cattle farmers are being forced to sell of their herds due to extreme drought.
Governor Hutchinson has sought a Disaster Declaration to help local farmers financially.

Sharp and Fulton Counties, along with a small portion of Randolph County are the only counties in the state that are under extreme drought, or a D3-4 rating on the National Drought Monitor, on a scale of 4 being the worst. While drought affects other counties, Spring River Country is suffering the worst.

The long reaching implications on farmers have been witnessed for weeks. With farming being the state’s largest economic sector bringing an estimated annual $16 billion to the state, according to Arkansas Farm Bureau. Arkansas is in the top 15 cattle producers in the nation. The tough decision to sell off portions of their herds has been a hard pill to swallow.

For the last three weeks, area farmer’s trailers have been lined up down the highway on Fridays at the Ash Flat Livestock Auction to sell their cattle. There doesn’t seem to be any relief in sight. Many have tried to keep their cattle but can’t feed them because of the dying grass, making the tough decision to cut their losses. Farmers in this industry rely on grass fields and hay to supplement costlier feed.During the D3 phase of drought, pastures are depleted, the supply of hay is short and there are more insects than usual. Trees in the area are also starting to show sings of distress and wildlife are having to seek food and water that is normally readily available as the water table lowers and ponds become dry. The drought has been hardest on livestock producers because the effects are almost immediate after several weeks of drought..

According to the National Integrated Drought Information System, Sharp and Fulton Counties suffered the driest month of June in 128 years, with a 3.65 inch average rain deficit.

Farmers are ready for help. The D3 drought stage is when assistance programs through the government are made available to help farmers financially. Local farmer Bart Schulz said, “I have already began selling cattle due to this drought. My hay crop was a little under half what it typically should have been. I think the difference between this and other droughts in recent memory is that in the spring, we had cool nights, so grass didn’t grow well. We went straight to dry and hot. Couple that with this terrible economy, five dollars gallon farm fuel, $1000 a ton fertilizer, it is a “perfect storm” for farmers. Even if we start getting consistent rain now, we are past the prime growing season. It is going to be tough for farmers to make it this year. The good thing is, farmers are a resilient bunch. I know state andfederal help is coming soon, and are the best help we can ask for at this point.”

One would think selling off of so many cattle would, in turn, drive the price of beef down but that is not the case. James Mitchell, an extension livestock economist for the Arkansas Division of Agriculture said in an interview with Talk Business that the prices of beef are driven by consumer demand for the product. “If you look at auction prices for slaughter cows, we’ve had a very strong slaughter market. Prices are five-eight percent above a year ago at this time.”

He explained that despite inflations, consumers are not turning from purchasing beef, some are downgrading the cuts they typically buy, but continuing to eat beef. “If you think about that newborn calf, it takes two years to become a steak on your plate. You’ll see higher prices in a year or two with fewer cattle going to slaughter. There’s a bit of a lag between drought and its effect on prices.”

Besides chicken, cattle and watermelon farmers in the area, row crops in neighboring counties that comprise a large part of the area’s economy also need more water to grow. This is increasing costs and stressing irrigation equipment. Besides increased water cost, fertilizer has also gone up and many crops were late getting in the ground due to the heavy spring rains followed by extreme dry weather. This could force some farmers to lose a lot of money and cut the crop yields extensively.

Besides the farmers, employment statistics show that one in every six jobs in the state are also tied to agriculture. While the drought most affects cattle farmers locally, the real impact of the drought on both Spring River Country and the state will not be fully realized until harvest.