Hartung honored for 22 years of service at Wee Care Daycare 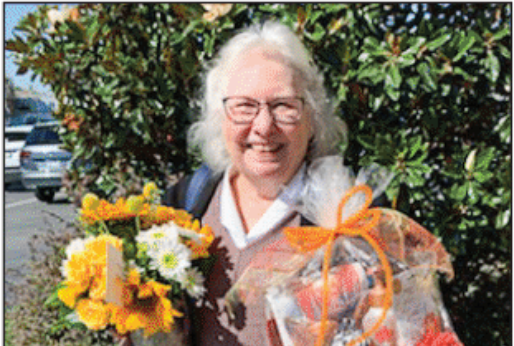 PHOTO/ANDREA BRUNER
Jo Hartung was honored Oct. 21 as she celebrated her last day at Highland Wee Care after 22 years working with the Network of Community Options, impacting the lives of thousands of students.

By: Andrea Bruner, Guest to the SRC

When Highland Wee Care Day Care opened its doors Mon., Oct. 24, it did so without Jo Hartung at the helm.
After 22 years with Network of Community Options, Inc., the parent organization for WCDC, Hartung is retiring.
She has done double duty while at the preschool, serving as the director as well as registered nurse. She has also helped teach the CPR classes for NCO employees.
Hartung said when she started with the preschool, it was called the Johnson Enrichment Center but it merged with another facility in 2000 and became Highland Wee Care Day Care and Learning Center.
Hartung said she came to Arkansas from Wisconsin. “My husband at the time was a golfer and he wanted to be in Cherokee Village, so we came here for that – he played golf 24/7.”
The two eventually split and she married Vasily Slavik from Ukraine.
“I met him at church,” Hartung said, explaining they attend Seventh-Day Adventist Church in West Plains, Mo.
Hartung has a son and two grandchildren who live in Little Rock along with four stepdaughters, a stepson and several step grandchildren.
She said she had been working at a local nursing home and when she left, her neighbor was working at the Johnson Center at the time. “They needed a nurse; she asked me to apply and I did,” she said.
Hartung said she has also worked with adults at the Russell J. Stuebing Home as well as The Martin Center, an adult day treatment facility, both in Ash Flat.
“They both just put a smile on your face, they make you happy, the little ones and the adults,” Hartung said.
Hartung said she has no definite plans in retirement, but she does plan to go see her grandchildren more. She laughed and said that she also wants a miniature donkey.
She said what she’s going to miss the most about the daycare are the children.
“I worked at the nursing home, I worked with the geriatrics, and I came here and worked with children. Then they put me with adults and that was OK, but I love working with children.”
“Children make you feel younger and say funny things,” Hartung said with a laugh. “We had a little boy one time with a Yoda jacket, and he would talk in a Darth Vader and a Yoda voice. When we took him to the playground, his face just lit up at all the kids there to play with.”
Hartung said both preschools at Highland – Wee Care Day Care and Wee Care Child Enrichment Center – are both inclusive, meaning they enroll typically developing children and those with developmental delays.
“The greatest thing is seeing a child who cannot walk, and when they leave our building they get up and go to kindergarten, or seeing (children with) tube feeders able to eat real food before they leave us.”
Hartung said she enjoyed working with adults but working with children is special to her. “That’s the beginning of life, and you have so much you can give them. …
“That’s our purpose for being there, and that’s what it’s all about.”