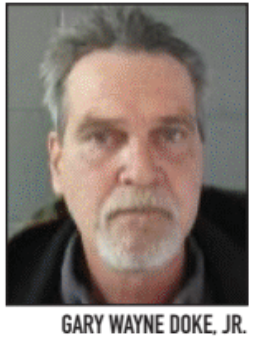 A Fulton County man is facing 100 felonies related to possession and manufacturing of child pornography. A bench warrant was issued by Sixteenth Judicial District Judge Tim Weaver for Gary Wayne Doke, Jr., 56,on Jan. 11 in the case. Fulton County Sheriff Jake Smith explained a tip came into the sheriff’s office from Internet Crimes Against Children (ICAC). After Fulton County Lieu-tenant William Fawcett investigated the report, evidence led him to Doke’s residence. A search warrant was issued and executed by the Fulton County Sheriff’s Department in which multiple electronic devices were seized and sent to the Arkansas State Police for analysis. Data that was extracted revealed numerous sexually explicit images. The warrant was issued and Dokes was taken into custody. He was charged with 100 total felony counts, including 50 counts of viewing or possessing child pornography and 50 counts of manufacturing child pornography. According to Sheriff Smith, The manufacture of child pornography charge stemmed from the use of images of minor children and using photo editing software to display them in a sexually explicit manner. Sheriff Smith said, “The Fulton County Sheriff’s Office will not tolerate sexual predators, especially child predators. The FCSO submits all additional data seized to UCAC in an effort to prevent any future exploration of children. ”Deputy Prosecuting Attorney Dwayne Plumlee petitioned the court to have Doke’s probable cause affidavit sealed due to the fact the photos contained unidentified child victims. Circuit Judge Tim Weaver granted the document sealing and set bond for Doke for $50,000. At press time, Dokes remained incarcerated at the Izard County Detention Center.