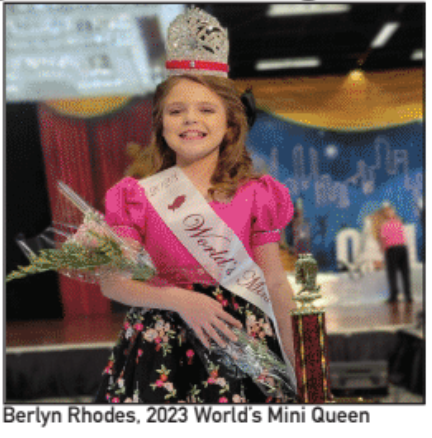 Two years and two national titles are something to brag about. For one local beauty, Berlyn Rhodes, competed in the 61st Anniversary Worlds Universal Beauty, a division of the Our Little Miss Pageant in Houston, Texas. Beryln is a third grader at Cherokee Elementary School who competed in her first pageant July, 2021 in Hardy and has been hooked on the competition circuit since. She brought home the prestigious title of 2023 World’s Mini Queen. There were four titles she could’ve won at the competition, Queen, Princess, Mini Queen, and Personality, and she won Mini Queen. She competed in beauty, sportswear, interview, and “Team OLM” where the judges watch the girls interact and play games amongst themselves. During finals she placed in the top15, and she had to answer an onstage question. She then advanced to the top four, where she was chosen for her new title. Berlyn moved on from her first competition in Hardy last year and later took the title of Petite Miss Sharp County at the Sharp County Fair. After competing at the county level, she moved onto state and brought home the title of Arkansas Our Little Miss in November of 2022. This qualified her, for Worlds. Berlyn has had to do lots of fundraising for her trips. Before each pageant, her mother Jen said she picks three to five dresses for her daughter, but the final decision is Berlyn’s on which one she chooses to wear in the competition. Our Little Miss was foundedby Marge Hannaman. As a professional basketball player and model she realized the importance of physical fitness and beauty for women. While judging a small hometown festival queen pageant she saw the hundreds of people watching their little ones as they walked across the stage with little or no poise but each had a huge smile and wave for their family members. The girls were awarded a paper crown and rose and every single contestant walked away a winner just by participating. Hannaman set out to bring this joy and family hon-or one step further by transforming the paper crown and rose into a lifetime of memories as Our Little Miss became the first children’s pageant of its kind to be presented on a major level. Although stricken with Parkinson’s, Mrs. Hannaman was a vital adviser and supporter of the company and scholarship com-petitions until her death in May of2006. In honor of her life her family has formed the “Marge Hannaman Scholarship Foundation” a not-for-profit corporation to assist in the continued education to deserving recipients. The foundation will also give back to her beloved Our Little Miss participants and families who may fall on hard times through ill-ness or natural disasters. Besides holding the title of 2021Arkansas Universal Beauty. She also holds the title of 2022 Mid-South Regional Universal Beau-ty and 2021 Petite Miss Sharp County.