Bridge reopened on Highway 56 near Franklin 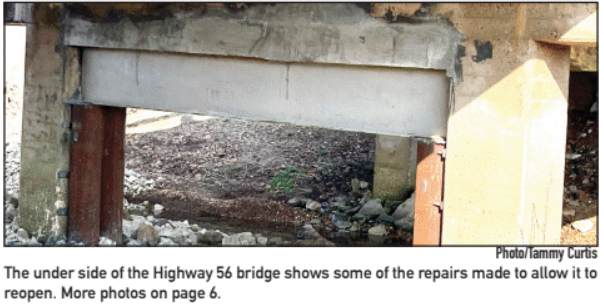 Residents who utilize Highway 56 for travel were pleased to learn they would no longer have to take a detour to avoid a bridge closed for over a month on the highway.
The bridge has been closed on Highway 56 between Ash Flat and Franklin, near Myron since Nov. 22, but was reopened Friday by the Arkansas Department of Transportation.
Repairs were underway on Dec. 2. The job was estimated to have taken two weeks, but weather delayed the opening. ArDOT closed the bridge due to “structural issues” discovered during an inspection by ArDOT.
Photos of repairs taken under the bridge show that support columns have been reinforced and a hole showing rebar from the highway above have been patched. The steel beams appear very rusty but the inspection by ArDOT engineers deemed the bridge safe to open and traffic began passing on the bridge on Dec. 29.
When the bridge was closed, no passage barriers including a fence, barrels and gravel piles were placed on both ends of the bridge.
The severe non safety of the bridge’s condition was evidenced on Nov. 27, when this news agency visited the closed structure. An ArDOT employee who was at the bridge said he has been required by the state to visually check the barriers twice daily to ensure they are still in place and that no one has crossed the bridge.