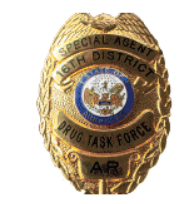 Highland graduate and former Ash Flat resident Johnny Byler has been appointed the new Commander of the 16th Judicial District Drug Task Force.
Byler has been a long-time employee of the Drug Task Force as a Special Agent; most recently serving as the Deputy Commander. The Commander of the Drug Task Force is responsible for overseeing the DTF agents, narcotic investigations, and adheres to strict guidelines set by the Federal government regarding operating procedures of the Drug Task Forces across the U.S. and State of Arkansas.
Byler will be replacing Geoffrey Watts as Commander who has accepted a position with the Izard County Sheriff’s Department.
“I am excited and honored to have been considered for this appointment” Byler says about his recent appointment. Johnny has worked in narcotics for most of his law enforcement career; most of which was within the 16th Judicial District. “Fighting against traffickers of illicit narcotics is an ever-changing game, and I look forward to continuing to be their biggest opponent.”
“Byler has been an invaluable asset to the Drug Task Force and the citizens of the 16th Judicial District. The Drug Task Force is an assisting agency that began back in 1989 with the main focus being it’s namesake; the aggressive targeting and eradication of drug traffickers who plague the communities we serve. Having worked alongside Johnny on countless large-scale investigations, I can feel rest assured that the task force is in excellent hands.” Watts said about Byler.
The 16th Drug Task Force is only made possible by the agencies and communities it serves. Be sure to thank your Sheriff’s, Police Chiefs, and all other City and County officials because without their support, we would not be able to do what we do.