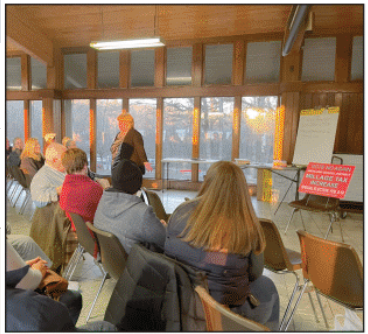 Michelle Peterson of Cherokee Village, chairwoman of the newly organized Citizens for Highland School District Accountability speaks and takes questions of a large audience Jan. 5 at the group’s first meeting. The group’s goal is to once again make the voices of the 2/3majority who overturned the 8.9 mill increase in November be heard. A Special Election to attempt again to pass the millage has been set for Feb. 14 with early voting beginning Feb. 7.

• Absence of competitive bids for the estimated$30 million building project

•No plan to utilize excess revenue to pay off the debt

A group of voters representing the interests of the 62.8 percent majority who voted against an 8.9 mill increase for the Highland School District in November organized to again overturn the millage initiative. It will be placed on the ballot Feb. 14 for a special election. The chairwoman of the group, Citizens for Highland School District Accountability, Michelle Peterson, organized a meeting which was held on Jan.5 at the Thunderbird Recreation Center. Peterson explained while she was not opposed to the district building a new high school, she found there were many concerns voiced to her regarding the reasons the district quickly moved forward with the plan. Peterson, a retired teacher and former Highland High School English teacher said she first learned of the proposed millage increase from an article posted in this newspaper on Dec.14.She formed the group after being approached by several citizens and donors who wished to help with costs associated with the campaign.

Why a Special Election? Less than a month after the millage was defeated during the Nov. 8 General Election by a to 2290 to1357 margin, the Highland Schoolboard voted Dec. 1 in a special called meeting to again place the pro-posed millage increase on the ballot. Superintendent Jeremy Lewis said, “Obviously we feel like there is a need for a new facility and we feel like safety is a big issue. This is a decision for the next generation or next 30years or so.” Public Relations Coordinator Kara McEntire said the district reviewed feedback after the General Election and said she felt they have addressed the concerns of the public.

“I think we addressed them as they came up, for people to get a better understanding. We tried to get as many people as possible but there is always going to be groups who are misinformed. There is always misinformation out there. ”Voters at the meeting indicated that there had been no new information placed on the Facebook page created for the millage Highland Proud since announcing the millage had been over-turned in November. The meeting at Thunderbird brought out a large crowd of voters who, like Peter-son, sought answers regarding the reasons the district chose to not accept the voter’s wishes and how to move forward in an attempt to overturn the millage again. The main discussion, presented by Peterson and Cherokee Village resident Kathleen In-galls cited reasons she and others have cited as to why millage had not passed. Among the largest was the lack of long term planning, viable options other than new construction, focus on aesthetics overeducation and no plan to repay debt with excess tax revenues from the millage. Other concerns were the passage of the new state law regarding re-appraisal of personal property values every three years as opposed to the current five. Non transparency to the public in regard to answering questions submitted or being allowed on the agenda of board meetings was also a concern voiced by several at the meeting.

Why would a retired school teacher take on such a large and important issue? Peterson said she wasn’t made aware of the first 8.9 proposed millage increase plan until September. After learning about the two public meetings being hosted at the school through the newspaper, she and her husband attended and walked through with building with Superintendent Jeremy Lewis and Assistant Super-intendent John Sinclair. They also asked questions of the board members. “When it was defeated, I knew someone had to come to the plate and be a voice for the majority. So, I decided to put myself out there. Knowing that as a re-tired teacher I was going to be persecuted about it because I was inside the school district. I think we need to come together to be fair to the community. I wholeheartedly believe we need a full study of all options…not just building. I don’t believe a full study was done. We haven’t seen competitive bids. We have not seen the reports at the level we need to see. ”Peterson explained she has conducted hours of research from viable sources utilizing her experience as along term teacher. She said, “Other districts across the country have done a three to five year study before they even ask voters to fund a $30 million plus new high school. That hasn’t happened here. If we are going to be fair, we need to listen to both sides. You aren’t going to be well informed if you don’t listen to all the arguments.”

When and where can residents vote? While the weather is a concern in February, early voting begins on Feb. 7 at the Sharp County Courthouse. If a voter lives in Fulton, County who pays taxes in the Highland School District, they may vote at the Sharp County Courthouse during early voting. All voters in both Sharp and Fulton county can vote at all regular voting centers on election day, Feb.14. Anyone living in Fulton County or Sharp County can also vote at any of the Sharp County voting centers or the one that will be open in Fulton County.The following locations will be open on election day. Ash Flat- Courthouse, courtroom, Glencoe- Fire Station Cherokee Village-City Hall, Hardy, Civic Center Highland- Fire Department. Williford- Newsong Baptist Church. The ballot is available online at arkansasvoterview.com