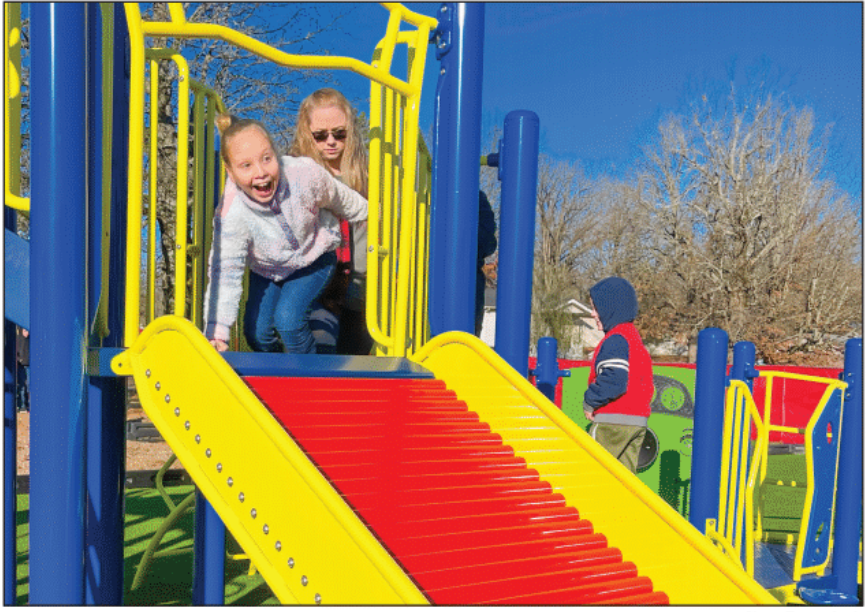 A large crowd was present at Cave City Elementary School Jan.5 as the Lincoln Playground was dedicated after over six years of fundraising efforts and receiving a grant last year to finally make the handicapped accessible playground that is incorporated into the regular playground. It allows all children to play together, bridging the gap between children with disabilities and their friends. The playground was named after Lincoln Qualls, the son of Brandon and Kayla Qualls.

An over six years dream of providing a playground where handicapped children could play with their friends without having to use a separate area became a reality last week. Cave City School District Occupation-al Therapist, Kayla Qualls first discovered inclusive playground projects such as the one at Cave City while she was in graduate school. She realized she would like to someday make one a reality for students at Cave City. For over six years, fundraising efforts took place to make the project a reality, hoping at first for just a single place of inclusive playground equipment. From selling donated watermelon in cups at the Watermelon Festival to concession stands, the money slowly trickled in. For over six years, Qualls and volunteers who she cold recruit raised nearly $25,000. With Superintendent Steven Green’s help Elementary and Secondary School Emergency Relief (ESSER) funds opened a whole new window and allowed Qualls to dream even larger, eventually creating and funding an entire inclusive play-ground. “We really got serious the last few years. Things really started kicking in gear, ”Qualls said of the massive effort to raise the funds to match a$200,000 grant. Cave City Elementary Principal Debbie Asberry explained several local businesses donated time, money and supplies for the fundraisers. “It was pretty much who I could get to volunteer. It was basically whoever heard about it at the time and wanted to join in, helped,” Asberry added. The grant that was applied for last year came from ESSER fund and was approved last Spring. At that point, Asberry said they knew the project would be funded. During the fund-raising efforts, Kayla became pregnant with her son Lincoln, who was born with a rare genetic syndrome called Rubenstein-Tay-bi syndrome as well as spina bifida. “The playground was one spot that you could certainly notice that not all kids were able to participate with their peers and it is heart breaking. This has been the big-gest blessing for me not only because now I have a child with a disability, but because all the kiddos are now able to play together inclusively.

Peer to peer interactions with typical and non-typical kids has an astounding impact on quality of life for those with and without dis-abilities,” Qualls said just moments before she cut the ribbon, officially opening the playground. Asberry welcomed the crowd including Superintendent Green, Mayor Jonas Anderson, the schoolboard, project directors Wayne Davis and Jennifer Davis Rogers from Davis Playground out of Maumelle, as well as business owners who donated or assisted in the project “A big project like this takes a lot of planning. With the support of the com-munity, fundraisers, donations from businesses and a sweat and volunteer work, this project has become a reality for our Cave-men and Cave women and future Cavemen and women. I am honored and humbled to be part of this project,” she began before thanking business leaders for coming. “This project was inspired by Mrs. Kay-la Qualls. Mrs. Qualls did so much work to make this project possible that we would like to name this project after Mr. Brandon and Mrs. Kayla’s son Lincoln, and call it the Lincoln addition.” Qualls fought back tears as the reality of the lengthy project was finally a reality, but also that it was named after her son in honor of her work. A Lincoln bench was also ordered and will be installed when it arrives. Among the first students to enjoy the playground were Keonna Martin and Lauren Claire Colvin . The girls were all smiles as their aids Les-lie Moody and Kris-tin Townsend caught them as they slid down the slide and helped them get seated on the merry go round. The colorful equipment is incorporated into the main play-ground. The sensory and handicapped accessible equipment includes slides, sensory equipment and a huge rocker that even children in a wheel-chair can access easily. While the bumpy sensory slide was a huge hit, the first children to play were thrilled with plastic adaptable merry go round with molded seats that rests on the turf. The lightweight structure allows for children to easily push it without the possibility of getting their body stuck beneath the structure, as with traditional metal merry go rounds. The ground is covered with turf and children with both wheelchairs and walkers can access all of the equipment effortlessly. Asberry explained when the all inclusive playground was being created, they couldn’t allow the current one to be left alone, fall zones and other improvements were created to merge the areas seamlessly. Asberry explained that Eric Johnson with Johnson’s Fencing has been great and came to the school and put up Caveman Red privacy netting through the fence just before the ribbon cutting ceremony. Lori Laman’s preschool playground also had to be relocated because it was on a portion of the playground where the new one was located. Laman said besides herself and Johnson, until the ribbon cut-ting no children have been on the equipment, which would stand to reason for the squeals of excitement as the entire campus watched, anxious for their turn during the ribbon cutting. The Cave City Elementary School has over 600 students. Students were introduced gradually to the playground last week and trained on the proper use of the equipment. “From the get go, all I have wanted is for all of the kids we see in therapy and typical kids to be included whether that be a physical or develop-mental limitation,” Qualls explained. “I am just so excited for all of them.”