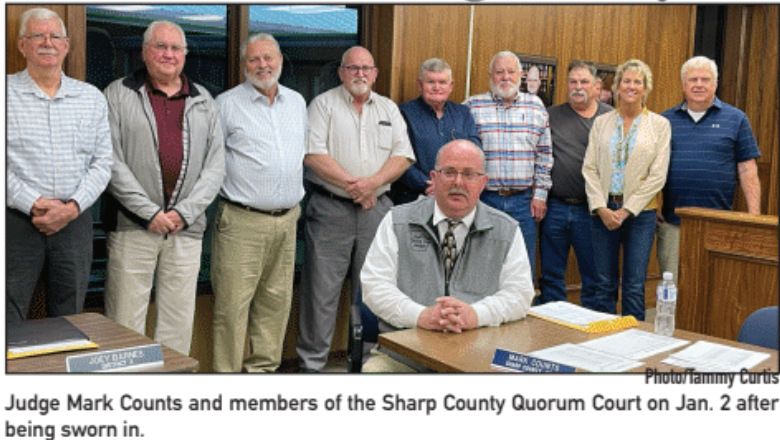 Sharp County Quorum Court met for the first time under new County Judge Mark Counts on Jan.2 with a relatively short agenda. Under the new business portion of the agenda, the court passed an ordinance for the county to add a line item to account for funds from a grant received by Circuit Judge Adam Weeks, who presides over juvenile cases in the county. The U.S. Department of Justice Federal Juvenile Grant was accepted by Weeks. The ordinance, was read in its entirety by Justice Kevin Dienst and then read twice by title only. The ordinance was adopted by emergency clause and effective immediately. Counts told the court he was looking to hire a new road superintendent.

“The superintendent that I am looking at has 12 years of experience. I also have a secretary’s position at the road department. That is a position that I would like to take off and put somebody out on the road working on the road, getting extra help on the road. I am also looking at someone to take over as an Office of Emergency Management grant writer that will be one person not two people,” Counts explained. He said he had the opportunity to start the off the road super-intendent $34,000,increasing the county road department’s budget $13,250 for the year plus benefits, which had yet to be figured on the salary. This included the department eliminating the secretary position and hiring an assistant road superintendent who also writes grants for the Office of Emergency Management. This position has not been filled. Counts eliminated a road foreman position. The former OEM coordinator, Jeremy Langston, who ran against Counts for the county Judge seat, was also an assistant road superintendent. Langston was terminated by Counts on Jan. 1, a few hours after being sworn in as county judge in a separate ceremony than on Jan. 2 when the rest of the county employees took their oaths. Later in the meeting it was announced the Counts hired Cave City area Justice of the Peace Todd Price. Price, who has served the court for 12 years, abstained from the vote on amending the budget to include his new position. Governor Sarah Huckabee will appoint a person to complete his term. Justice Tommy Estes suggested Larry Brown be considered to fill out the position. A resolution was passed to accept Price’s resignation and will be sent to the governor within10 days. Counts also made the court aware of a water line break that occurred on Christmas Eve at the prosecutor’s office. The clean up team has been working in the office. The personnel in the office we removed into the annex portion of the court house’s judge’s chambers. Counts also announced Treasurer Wanda Girtman received a check from insurance from the storm that destroyed the show barn at the fairgrounds. Counts said Girtman will be issuing a check to the fair board so they may move forward with the repairs. Counts said there was equipment in the shop that needed repairs, including a road grader that is valued at around$50,000 with a trans-mission out that will likely cost more than the worth. A new motor that will cost around $30,000 is also needed for the shaker at the gravel pit. Also, the judge explained a Freight-liner in the shop with a transmission being installed, yet a cost wasn’t discussed on the repair. “I have run into some costs right here at the first of the year left form e to handle. I just wanted to make ya’all aware of it,” he explained. While there were funds left over in the County Road department, since the in-voices were not generated by the end of the year, the funds will have to come out of the 2023 budget. The Sharp County Quorum Court meets the second Monday of each month at 6 p.m. at the Sharp County Courthouse in the in courtroom.