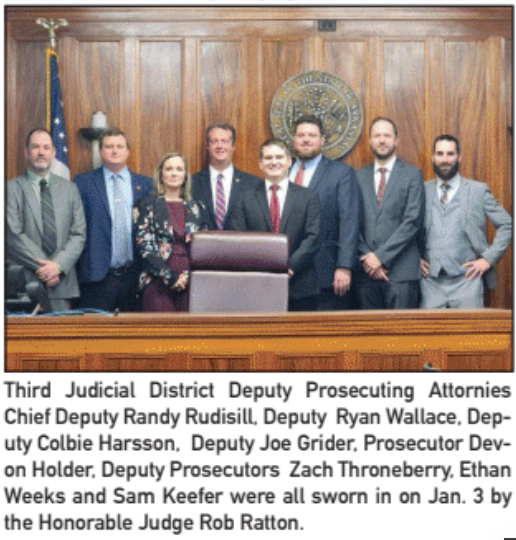 Sharp County is be-ginning 2023 with renewed faith in their justice system. Newly elected Third Judicial District Prosecuting Attorney Devon Holder announced some plans for changes within his district and also took an opportunity to introduce his newly appointed deputies. One of the changes should be well received by the area who have become all too used to repeat of-fenders never receiving prison sentences, numerous negotiated pleas for prison terms much less than recommended by the law and countless suspended imposition of sentences for serious felony crimes.

Holder said, “There will be more jury trials in the Third Judicial District. We’ve not been having nearly as many as we should over the years, and it has hurt our ability to negotiate tougher sentences for violent crime. It will be hard work, but it will payoff in the long run with safer communities. ”Holder announced that Zach Throneberry will be the Chief Deputy Prosecutor. He came to Holder highly recommended from the 21st Judicial District (Van Burenand Crawford County) where he served as the Chief Prosecutor for the last few months. Throneberry will be in charge of all felony cases in Sharp County and approximately half of the felony cases in Lawrence County, as well as all revocations in both counties. “Throneberry is a hard worker who communicates well, gets things done in a timely manner, and earns the respect of everyone around him,” the prosecutor explained. Ethan Weeks is an attorney in Walnut Ridge with a back-ground in general practice and criminal law. Weeks will begetting some hands-on training from the Chief Deputy as he takes over a portion of the felony and misdemeanor docket in Lawrence County. Holder said, “Weeks is a tough negotiator with outstanding discernment that will serve Lawrence County well.”Colbie Harsson, a Searcy attorney with experience as a chief deputy prosecutor in the 17th Judicial District (White County)will work primarily with the felony case-load in Jackson County and will help as needed with high-profile cases in the district. Holder said,“Harsson is highly respected among Arkansas elected prosecutors and brings in-valuable experience to the team, having prosecuted several murder cases to completion with a jury. ”The final deputy prosecuting attorney hired by Holder is Randy Rudisill, who will continue working primarily in Jackson County. Joe Grider and Ryan Wallace will continue working in Randolph County, and Sam Keefer will continue working primarily in Sharp County. “All four of them are experienced, knowledgeable, and have a working relationship with law enforcement, ”Holder is honored to have been elected through the trust of the voters in the district and looks forward to serving the area