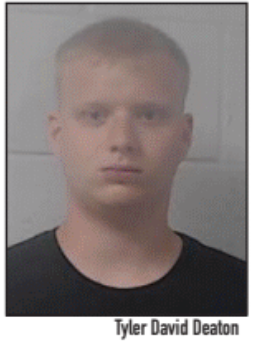 FROM COURT AND POLICE RECORDS

After first being arrested on Sept, 2 on a bench warrant for five Class B Felony Sexual Assault charges, 21-year old Tyler David Deaton was officially charged with five more sexual related felonies on Dec. 27. Those include two counts of rape, Class Y felonies; four counts of second degree sexual assault, Class B Felonies; and Sexually Grooming a child, a Class A misdemeanor. According to court documents, Deaton’s second set of charges came after a Nov. 23interview was con-ducted by Arkansas State Police Crimes Against Children Investigator Cham Buchanan. She conducted interviews with two minor victims on Nov.28 after receiving an email about alleged sexual abuse of two children. The children, including a male, told the investigator of four events that included forced oral and anal sex. The victim also alleged Deaton threatened to hurt his siblings if he did not comply with the activities. Deaton also allegedly showed the child pornography on at least two different occasions at his home. The original charges outlined on the bench warrant were explained in a Probable Cause Affidavit by former Sharp County Detective Dennis Gay. Gay instigated the criminal case after receiving a call on May 31, 2022 from Arkansas State Police Crimes Against Children Senior Investigator Josh Dixon. The information outlined alleged sexual abuse of a minor female by Deaton. The female victim stated Dixon had attempted oral sex, had touched her or made her touch him in a sexually in-appropriate manner at least 50 times over the last two years. There were also other allegations of sexual misconduct by the child. As in the case with the male victim, Deaton also allegedly made threats to the child if she were to reveal the alleged acts. Deaton was taken into custody and the bench warrant in the original case was served on Sept. 2.The probable cause affidavit in this caseCR-22-148 was filed with the clerk’s office on Dec. 27, six months after the re-port was made. Official charges in that case have yet to be filed. Special prosecutor Jack McQuary will prosecute the case for the state.