For the love of America: Local truckers join The People’s Convoy 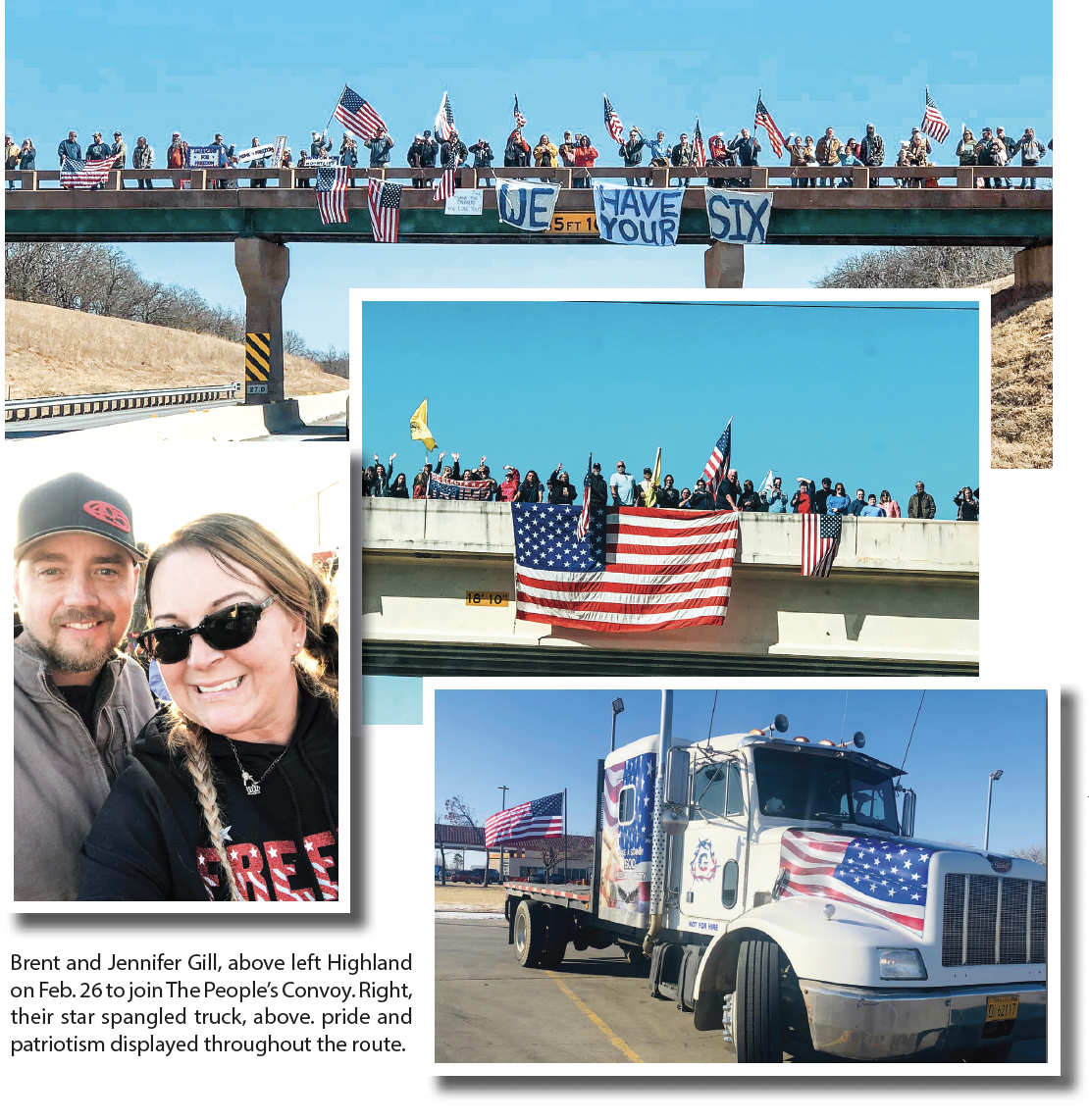 God has put this on my heart for a while and my husband has went along with my madness.  I am one lucky girl.  So we started on this journey just yesterday and caught up with the Peoples Convoy this morning in west Oklahoma. It has been an amazing and emotional day. The love, support and patriotism is something I cannot describe.

The show of American spirit and patriotism began being displayed across America on Feb. 23 as the People’s Convoy left California, picking up truckers across the nation at various stops.

Locally, Brent and Jennifer Gill joined the convoy with their semi truck on Feb. 27,  just west of Oklahoma City.

The People’s Convoy was launched from Adelanto Stadium, Calif. on Wednesday. Each night the convoy has designated overnight stops and others join the route along the way with many planning to complete the entire 11 day cross country convoy. The peaceful convoy is a show of solidarity by people from all walks of life and is set to end in the Washington, D.C beltway on March 5.

The message of The People’s Convoy, which was organized by American truckers, is simple. “Our core principals of freedom and liberty give rise to the convoy’s request to end the State of Emergency that led to overreaching mandates.”

According to their official website, “The last 23 months of the COVID-19 pandemic have been a rough road for all Americans to travel:  spiritually, emotionally, physically, and – not least – financially.  With the advent of the vaccine and workable therapeutic agents, along with the hard work of so many sectors that contributed to declining COVID-19 cases and severity of illness, it is now time to re-open the country.  The average American worker needs to be able to end-run the economic hardships of the last two years, and get back to the business of making bread – so they can pay their rents and mortgages and help jumpstart this economy.  To that end, it’s time for elected officials to work with the blue collar and white-collar workers of America and restore accountability and liberty – by lifting all mandates and ending the state of emergency – as COVID is well-in-hand now, and Americans need to get back to work in a free and unrestricted manner.”

The event’s organizers explained,  “The convoy is about freedom and unity. Tuckers riding are unified across party and state lines and with people of all colors and creeds.”

American truckers launched the peaceful and unified transcontinental movement, on

The truckers and blue-collar workers of the United States have been joined on this convoy by freedom-loving supporters from all walks of life – frontline doctors, lawyers, first-responders, former military servicemen and women, students, retirees, mothers, fathers and children.

Jennifer provided Facebook Live videos throughout her first day of travel and continually commented on how nice everyone was and the huge amount of support that the convoy has been given in every city and small town through which it passes.

She provided several shots of hundreds of Americans lining roads and overpasses clad in American colors, flying the American flag and cheering the very long convoy as they passed through the area.

She also showed video of how far the convoy stretched. As far as the eye could see both in front and behind the Gill’s star spangled semi were not just other truckers but also Americans in their personal vehicles with windows painted and flags flying following the convoy.

This is not the only convoy converging outside Washington, DC. Others are coming from areas like Florida.

Organizers of the People’s Convoy were certain to explain in their press release that “The People’s Convoy is a non-partisan, trucker-led effort supported by a cross-cultural and multi-faith contingent of supporters.”

It  is being assisted by retired military personnel and security experts, who have spearheaded the logistics in order to ensure a 100 percent safe, lawful and peaceful journey.

Jennifer said she has been overwhelmed by the showing of support through each town and had a very exciting, but exhausting first day of the convoy.

The truckers participating registered in order to keep track of the miles driven. The Gills wanted the public to know this convoy is not one of the others which plan to go into DC proper and is not associated with Bob Bolus Freedom Convoy or other convoys that may have already fizzled out due to lack of participation with goals of forming protests at D.C.’s belt line.

The Gills plan to remain with the convoy until they reach a location in Illinois on Wednesday when they must return to Highland for work.

She said the support from the communities has been overwhelming, including providing food and cards of thanks to all the truckers.

Jennifer invites the public to view her photos on her personal Facebook page. She explained the reason for she and her husband joining the convoy.

“God has put this on my heart for a while and my husband has went along with my madness.  I am one lucky girl.  So we started on this journey just yesterday and caught up with the Peoples Convoy this morning in west Oklahoma. It has been an amazing and emotional day. The love, support and patriotism is something I cannot describe. I am posting all the photos from today here (unless I have too many). The joy in these peoples faces is awesome. There are all ages and nationalities.  They have hope and great love for our country, even in the state it is in. But let me tell you about that hope.  It is inside us, deep down and sometimes we do not know where it comes from. That drive to do what is right and stand up for it …That is God’s spirit within us. So I hope you will take the time and check these out. Pray for everyone and seek God to see what it is He would like for you to do!! Thank you for the kind words and prayers. Keep them coming. God Bless America.”

By noon on Sunday, Feb. 27, The People’s Convoy had raised over $1.5 million to help truckers participating pay for expenses and fuel for their cross country convoy.