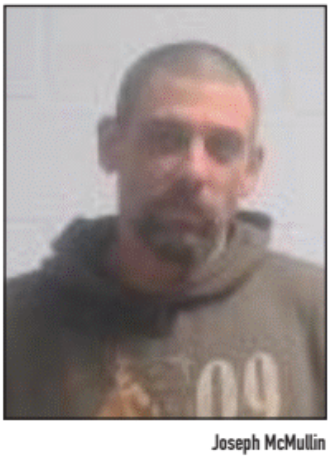 FROM COURT AND POLICE RECORDS

A Batesville man racked up five felony charges in Sharp County after breaking into a home and hitting the home-owner with a gun on Dec. 30. Sharp County Deputy Bob-by Glenn responded to a call at 650 Strawberry River Road, near Poughkeepsie to a home invasion and burglary. Upon arrival, Glenn found the male victim, Calvin Tucker, with a wound on top of his head, where he alleged a man had hit him with a gun after breaking into his and Theresia Wilkes home and shed. The couple told Glenn the suspect had fled the scene after pointing a firearm at them and striking Tucker on the head with the weapon. Officers searched the area and Officer Bladen Croslin located a vehicle and suspect matching the description given by the victims. At first the suspect attempted to provide officers with a false name but was eventually identified as Joseph McMullin, 42, of Batesville. A search of the area by Glenn and other deputies resulted in the discovery of several of the items described by the victims as having been stolen. During the search of the vehicle Investigator Dennis Gay located a white crystal like substance and a white powdery substance, as well as two glass smoking devices. The items field tested positive for methamphetamine.